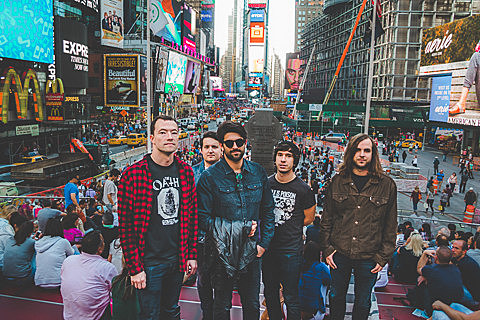 Self Defense Family and Touche Amore (and countless other punk bands) have released plenty of split EPs/singles in their respective careers, but when they decided to team up for this new one due next week (3/10) via Deathwish, they chose to change it up and make a collaborative release. That resulted in the songs "Circa 95" and "Low Beams," both of which have traces of the bands' individual personalities, but also sound like a unique new beast. The songs are great -- check them out for yourself below, via Vice.

Self Defense Family's tour with Creative Adult begins in NYC tonight (3/4) at Saint Vitus (tickets). That show was also to have included Makthaverskan, but unfortunately they had to drop off the Brooklyn and Philly dates due to visa issues. They'll be here for the second NYC show happening this Sunday (3/8) at The Studio at Webster Hall though (tickets).

As for Touche Amore, they're playing Bled Fest, Coachella, Coachella sideshows (with Desaparecidos and Joyce Manor), and making their Alaska debut.

SDF/TA stream and lists of tour dates, below...