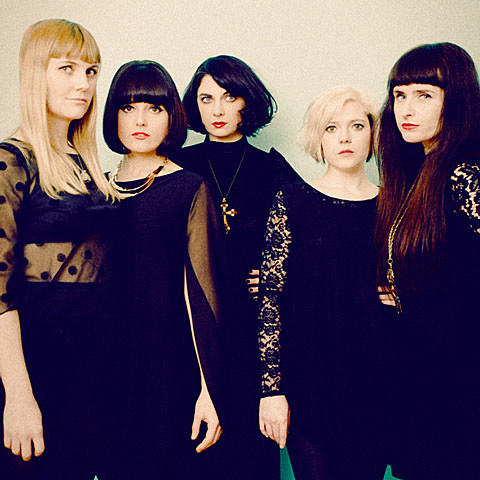 Irish band September Girls released their debut album, Cursing the Sea, back in January via UK indie label Fortuna Pop. Here's what I wrote then:

Let's just get this out of the way: Yes, it's another "______ Girls" band who draw inspiration from Phil Spector, VU and JAMC/C-86, but Dublin, Ireland's September Girls are quite good at what they do. (Yes their name comes from the Big Star song "by way of The Bangles.") Four of the five members (two of which were in The Chalets if you remember them) write and sing so there's some variation in the songs. Their debut album, Cursing the Sea, came out a couple weeks ago in the UK via Fortuna Pop (home of Joanna Gruesome and Shrag). I'm pre-disposed to like this kind of thing but I think it's definitely superior product.

Their album is finally getting a Stateside release via Kanine on November 25. The band played SXSW this year and will return to North America for CMJ next month. So far there are two shows on their schedule: the Oh My Rockness showcase on October 21 at Cameo with Mannequin Pussy, Vasudeva, Amanda X, and headliners PINS; and the Kanine/Insound showcase at Brooklyn Night Bazaar on October 24 with Frankie Cosmos, Flowers, Beverly and Only Real. Tickets to the Cameo show are on sale now and the BKNB show is free.