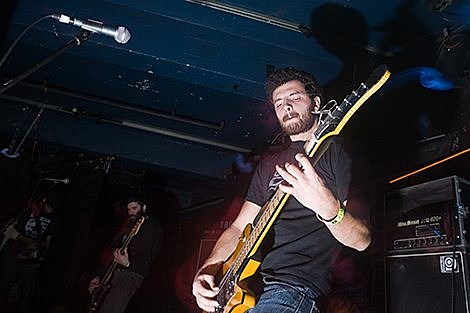 Seraphim's The Light In The Distance dropped earlier this year via A389/Chainsaw Safety, and it is truly a gem for fans of the epic-hardcore minded by bands like Isis. The band is playing a string of East Coast dates on their way towards a European tour with Pulling Teeth which will include a FREE show at Acheron on 11/7 (MONDAY) with Kings Destroy. The show kicks off at 9PM, and though the show is free, donations will be taken at the door that will go back to the touring bands. Stream The Light In The Distance below as well as the Waste EP, and catch Seraphim in your city if you're so lucky.

In related news, A389 have announced an impressive slate of releases that include a new Seven Sisters of Sleep/Children of God split 12", a new Ringworm/Mindsnare split 7" and Ringworm flexi, a reissue of Pale Creation's Twilight Haunt on vinyl, and a somewhat uncharacteristic release in Anne's Dream Punx 12", a band that owes more to Ride or My Bloody Valentine than Integrity. Check out tracks from all releases in the A389 boombox (the SSoS release comes HIGHLY reccommended) and order/preorder your copies at the webstore.

Stream a new Anne track called "Get It How You Live" and check out a video of "Virginal Plight" below alongside new SSoS and CoG videos and all Seraphim dates....