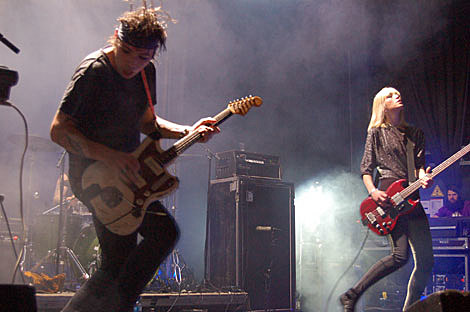 Serena Maneesh closed outthe BrooklynVegan official SXSW showcase at Club DeVille Wednesday night (3/17). The band didn't skimp on energy, even though their set went late into the night. Due to sound problems that delayed bands earlier in the night, Serena didn't start until 2:00am (one hour after their set time), and then their set was cut shot at 2:30am by the club/SXSW whose staff wanted the show over ASAP. Thanks to everyone who stuck around. Sorry to people who showed up after 2 to see the band only to be told by the uncooperative SXSW door guy that they we weren't letting anyone in even though the band just went on and there was plenty of room (we weren't getting along with them all night). Lots more on the show - including pictures and video - are coming (relatively) soon.

The rest of Serena Maneesh's SXSW shows are posted below, and they'll be in New York on April 8th for a show at LPR.

Serena-Maneesh - "I Just Want To See Your Face"