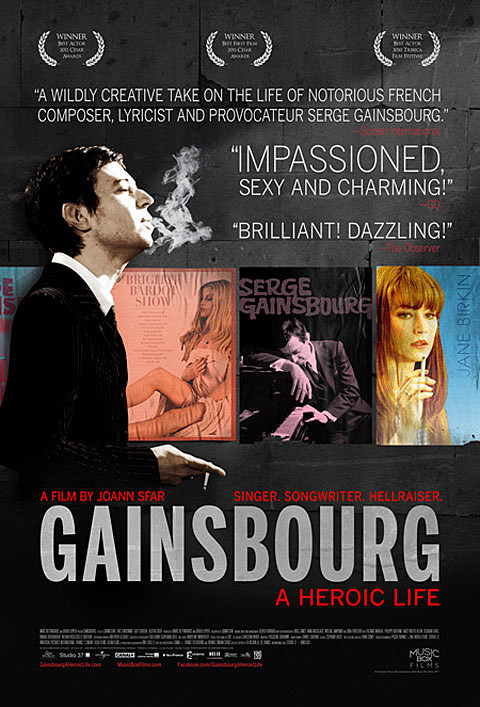 After surviving a couple minor major acts of nature, we deserve a long break. So for your Labor Day weekend... like usual, it's pretty slow, show-wise. But there are some things to do.

We'll start this week with a movie. Gainsbourg: A Heroic Life is finally getting a U.S. release (it came out in January 2010 in France), albeit a limited one, thanks in part to great reissue label Light in the Attic. The film started it's two-week Film Forum run last night and will be making its way around the country throughout the fall. All play dates are at the bottom of this post.

Heroic maybe, but for sure Serge Gainsbourg led a wild life before succumbing to cancer at age 62 in 1992. You could make a compelling film out of any period of his life, and that the movie tries to cram it all in -- from fleeing Nazi-occupied Paris as a child through his rise to fame, relationships with Bridget Bardot and Jane Birkin to his his '70s dalliance with reggae -- gives too much of your standard Behind the Music story arc.

But it's also untraditional at the same time. Writer-director Joann Sfar is a comic artist (this is his first film) and injects a big element of the absurd courtesy of a puppet-like alter-ego (alter-Id, really) that encourages Gainsbourg to do bad things. Eric Elmosnino, a dead-ringer for Gainsbourg, is terrific, as is the rest of the cast -- including Lucy Gordon as Birkin and Laetitia Casta as Bardot, plus appearances by eccentric singer Philippe Katerine and the late Claude Chabrol. It's got a great sense of style and, of course, the soundtrack is amazing. Gainsbourg: A Heroic Life could be better, but it's still worth seeing. 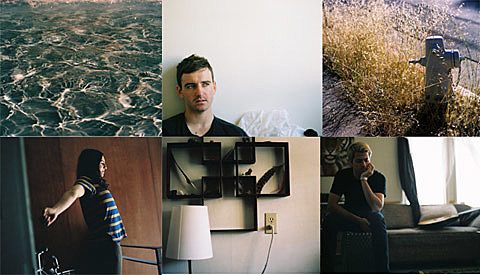 As for actual shows, San Francisco's vociferous and awesome Weekend will be here on Saturday (9/3) at Glasslands and Sunday (/4) at Mercury Lounge. Both shows are with the similarly cacophonous Talk Normal.

Weekend have a new EP, Red, out September 20th on Slumberland which finds the trio exploring new sonic territory, though not the quiet kind. It's still rather pummeling but Shaun Durkan's vocals, previously hidden behind echo and backwards reverb, are dryer and more up front now. The sound is a little sharper all around, but the driving, melodic basslines and guitar squall remain. You can download Red track "Hazel" via a Soundcloud widget at the bottom of this post.

In addition to Talk Normal, the Glasslands show features their Slumberland labelmates Brown Recluse; the Mercury Lounge show also has Fan-Tan on the bill. All Weekend/Talk Normal tour dates are at the bottom of this post. 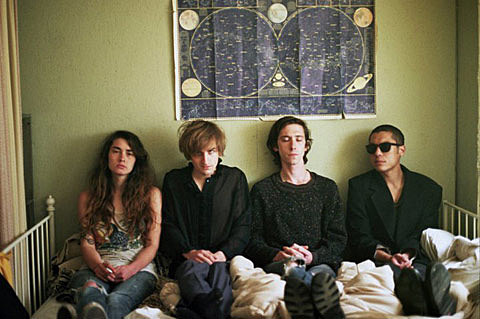 San Francisco's Royal Baths bring their heavy psychedelia to Death by Audio on Friday (9/2) with Xray Eyeballs, Hunters and Mountain Cult. I wrote previously: "Royal Baths are kind of bad trip acid rock, dark and seedy but not atonal. But it's definitely down the rabbit hole. In a good way." At the top of this post you can download a track off of Royal Baths debut LP  from last year. The band have a split double-7" with Ty Segall due out on HoZac any time now. Keep an eye peeled for that. 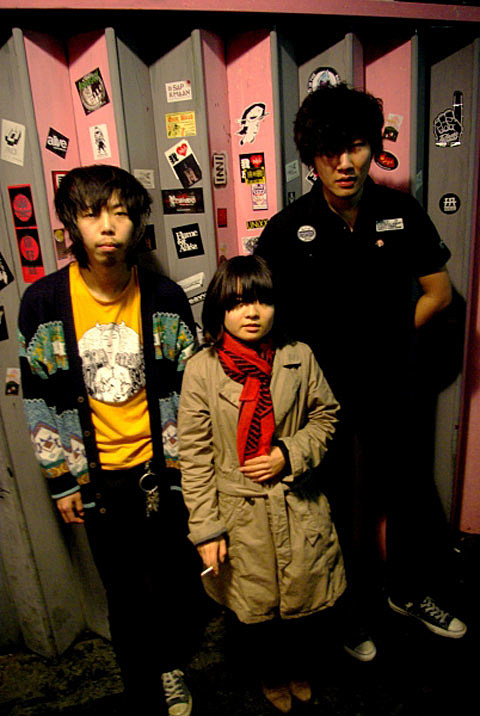 Bejiing's Hedgehog are back in America for the first time since CMJ: they play Bruar Falls on Sunday (9/4) and Cake Shop on Monday (9/5). After that they head out on tour with Xiu-Xiu and Kindest Lines, and all tour dates are at the bottom of this post.

I caught set at The Woods last year and the venue's atrocious sound didn't deter Hedgehog's tenacity, most ably embodied in Atom, their tiny pistol of a drummer. Looking at them, you might expect pop punk a la Japan's Blue Hearts, but Hedgehog make melodic indie rock. There's a couple tracks to download at the top of this post. They're a blast live, and there aren't a lot of shows Sunday or Monday, so here's a good international option for your concert dollar.

That's it of the "big" stuff in my world. Some more shows -- including a fair amount of free ones -- are listed day-by-day below.

Good show at Shea Stadium tonight. In addition to the recently-profiled Caged Animals, there's also new FatCat singings Forest Fire whose Walkmen-esque album Staring at the X is worth looking out for when it comes out in October on FatCat.

Nerdy rapper and Adult Swim voice talent MC Chris is throwing a record release party at Death by Audio for his new album Race Wars. It's also his birthday. Show is FREE. 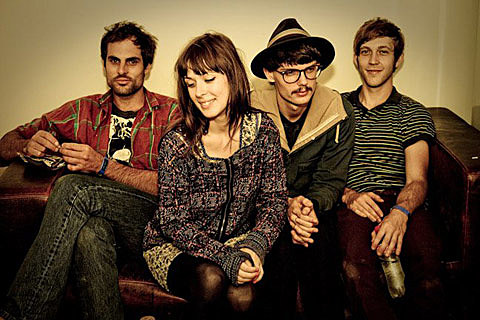 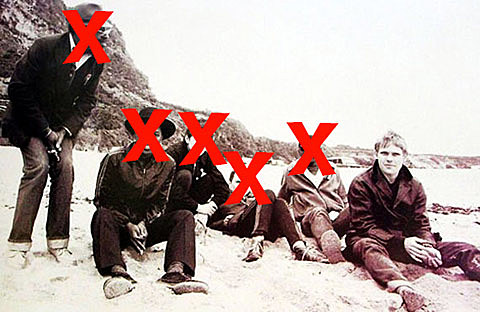 Dave Wakeling is performing at The Bell House under the English Beat name despite the band featuring no other original members of the group not to mention they do General Public songs too. I'm a huge fan of both groups, but him using the Beat name ruffles my feathers.

Head to Union Pool in the afternoon (4PM) to catch a special Light Asylum show. This is an expanded version of the group with three (!!!) drummers. This should be something. It's also FREE. More Light Asylum dates listed HERE.

It's a free show at Cake Shop headlined by pow! wow! who put on a killer set when they played my Sound Bites series this summer. Also playing: Weird Children, Crazy Pills, and El Jezel. Again, it's FREE.

Hunx and His Punx will be totally in-you-face (don't ask what part of him will be in your face) at Mercury Lounge. It's a late show -- doors at 10:30 -- and it's with the K-Holes. Hunx is always a good time.

videos and dates below... 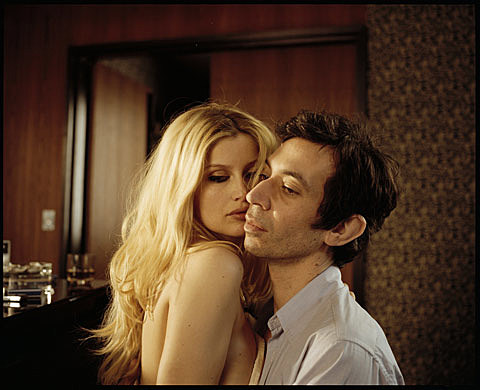 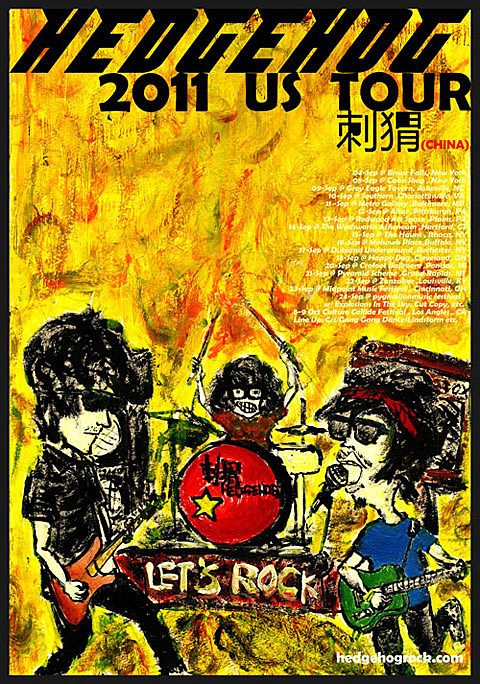