Unearthly Trance at MHOW in 2012 (more by Marcus Shaffer) 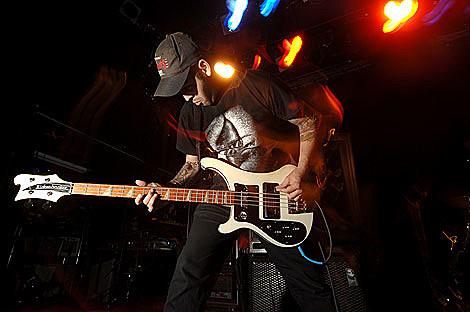 NYC's doom supergroup Serpentine Path are streaming a new song called "House of Worship" off of their forthcoming sophomore album Emanation, due out on May 27 on Relapse. Give it a listen below.

The new album follows their debut self-titled LP which came out in 2012--then, the band was comprised of the entirety of the now-defunct Unearthly Trance and ex-Electric Wizard/Ramesses guitarist Tim Bagshaw. They recently added guitarist Stephen Flam of NYC cult doom legends Winter to the lineup, giving that "supergroup" label even more oomph. Here's a bit of what we had to say about the new song over on Invisible Oranges:

"House of Worship" opens up Emanations, Serpentine Path's follow up to their 2012 self-titled debut. The song smolders in the post-apocalyptic sense, with expertly arranged, no-nonsense riffing and restrained drumming giving rise to something bleak and sinister. The addition of Stephen Flam is a smart and natural one, as Emanations draws on a similar mid-tempo approach to Winter's Into Darkness, where elements of death metal blended seamlessly with guitars coated in viscous sludge.

Our metal brethren Invisible Oranges will also be co-presenting Serpentine Path's record release show in NYC at The Acheron on June 2 in conjunction with Signature Riff. The show will also feature Churchburn, Throaat and Dridge, three bands that specialize in various blends of punishing death and doom. Tickets for the show, Serpentine Path's only scheduled date, are on sale now.

Listen to the new Serpentine Path song, plus streams of the other bands on the Acheron show, below...