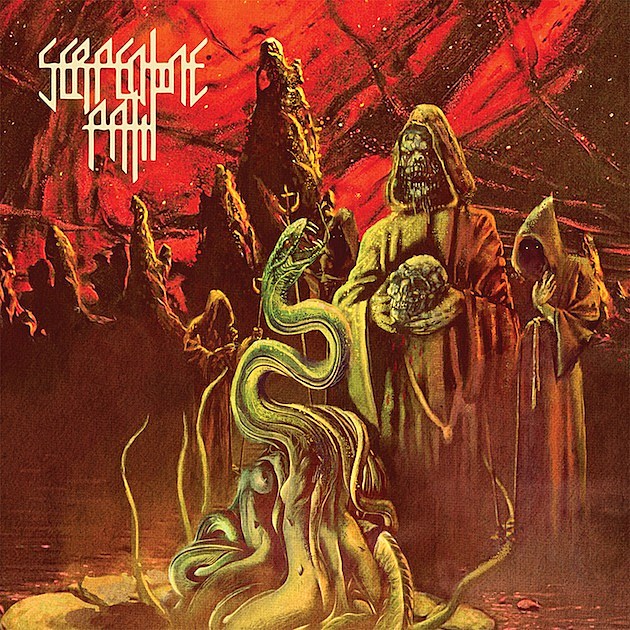 Relapse Records is rolling right now. Yesterday, the Pennsylvania located label dropped two of the most anticipated releases of the year, Serpentine Path's Emanations and Black Anvil's Hail Death. That would be a crowning achievement for most metal album dealers, but Relapse isn't done. Up next on the docket? Tombs' Savage Gold on June 10. That's a haul and a half, right? We'll wait while you grab your weight belt.

Serpentine Path is an NYC superdoomer. When the cultly adored Unearthly Trance broke-up, bassist Jay Newman, drummer Darren Verni, and singer Ryan Lipynsky kept things slithering slowly with ex-Electric Wizard/-Ramesses member Tim Bagshaw. The quartet expanded into a five-piece after their 2012 eponymous debut, adding Stephen Flam of Winter as a second set of six strings. (Winter's Into Darkness is a cornerstone of the discerning death/doomer's collection.) When we premiered "House of Worship" on Invisible Oranges, Wyatt said, "The song smolders in the post-apocalyptic sense, with expertly arranged, no-nonsense riffing and restrained drumming giving rise to something bleak and sinister." And is he ever right. The rest of Emanations continues that colossal stride, shaking the ground with every step. Listen to the entire reocord below. Make sure to catch them at the IO sponsored show, June 21 at The Acheron with Churchburn, Throaat, and Dridge. (Tickets.)

Speed-wise, Black Anvil is Serpentine Path's polar opposite, hitting a pace typical of blackened thrash. That said, there's little typical about their exemplary execution on Hail Death. The NYC rippers stretch out to Hell Awaits lengths while ably recreating the atmosphere of classic Dissection. Of course, they also throw in their share of head-nodding riffs, showing off the tricks the quartet picked up during their stints in the NYHC band Kill Your Idols. Read another review at IO. Black Anvil will play the full album at Saint Vitus on June 20 with Psalm Zero, FANTOM WARIOR, and Yellow Eyes. (Tickets.) Album stream below.

Of course, you may want to see about sneaking in some overtime before June 10. That's the date of Tombs' Savage Gold. The release will be Mike Hill and company's third full-length and it might be their best work yet. In an upcoming interview soon to hit IO, Hill told me, "This time around, we had a lot of time to work on the material. We wrote a lot but also discarded a lot." That attention to keeping only the cream certainly shows in the three tracks released thus far (listen below). Needless to say, expectations are high. If you're on the West Coast, you're also looking forward to Tombs hitting the road with Pelican for a June tour (dates below).

So, where else can you keep tabs on all of this stuff? Well, we run an Upcoming Metal Releases feature on IO every Monday that runs down the week's points of interest along with a few older selections that you need to know about. This time, we covered Black Anvil, Crowbar, Dead Congregation, Emptiness, Enabler, Eyehategod, Misery Index, Serpentine Path, Vanhelgd, and a whole bunch more.

Streams of Serpentine Path, Black Anvil, and Tombs, with dates below.