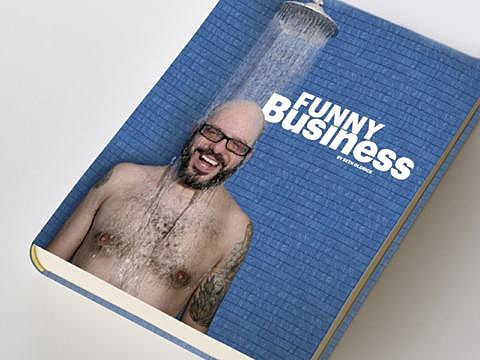 Finally, a Kickstarter campaign that gets the coveted Klaus Kinski Seal Of Total Approval and Gold Pass! Photographer Seth Olenick has been on the NYC comedy and music scene since 1997 and has amassed a gigantic and truly astounding portfolio of images of comedians, bands, and famous people. The images span a variety of scenarios; some are portraits that make use of props and environment, some are super in-the-moment live shots from shows, and all are masterfully executed and realized.

Although I've never really met him personally, I know Seth as an all-too-familiar face within the comedy scene. A friend to comedians coast to coast, Seth is entrenched in the comedy mix and comedy-related photographs is where he shines the most. Now, finally, some of his finest shots of funny business will be made available to the public (hopefully) in a Taschen-worthy book called Funny Business:

Funny Business is going to be an 11"x13" portrait-oriented, hardcover coffee table book with approximately 250 pages containing 200 full-color photos on glossy paper. This Kickstarter covers the 1st edition run of 1500 copies, 200 of which will come with a hand-printed special edition slipcase. I'm still finalizing the design that will be printed on the slipcases, and hope to unveil it before the end of this campaign. The book designer is Adriana Garcia, a Brooklyn-based graphic designer with years of experience on magazines, and a couple of books under her belt as well. The digital imaging guru is Jeff Spitery who has nearly 30 years experience with photo preparation for print, and is helping me with the retouching of all of the files as well.

I say "Taschen-worthy" because this book has all the attributes of a top-shelf Taschen art book. I also say "made available to the public (hopefully)" because this book is going to be self-published and requires us, fans of funny things and great photography, to put this sucker into production via Seth's Kickstarter Campaign. The campaign, which ends on March Monday Mar 11, 10:58am (SOON!!) allows potential donors to contribute anything from $1 to $5000 (or more). Each donation starting at $5 and more has assigned to it some pretty flippin' cool rewards as thank-yous for your generosity. For example, donating $2000 gets you the following:

Tim and Seth from Les Savy Fav will write a song about you based on information that you supply us about yourself. We will also make a video for the song, directed by animator/director Edmond Hawkins and myself. You will also get 2 copies of the special edition book, the ebook and the audio book, plus major bragging rights. You also get a double special thanks in the book.

Even a reasonable $150 donation will get you a copy of the book along with a limited edition 8x10 print of Patton Oswalt signed and numbered by Seth. This print is an edition of 25. You will also receive the audio book. Such an awesome book from an awesome local photographer. Get to donating! Every buck helps!