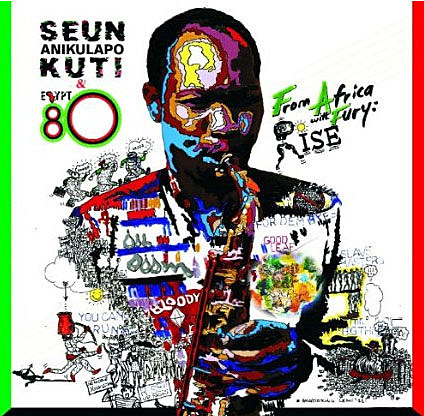 Tinariwen will be in New York this week to play Highline Ballroom on July 20 with House of Waters, and to play the Grassroots Festival in Trumansburg, NY the next day (7/21). Tickets are still on sale for the Highline show.

"...there was room to further adjust the blazing Afrobeat of Seun's first album Many Things into something more potent.

That was producer Brian Eno's prescription when he finally convinced Seun to let him produce his work. As Seun explains, "He showed me ways to open up the music. He gave me ideas about things we could do to turn the project from live music to a great live CD."

If you're expecting something in the vein of The Unforgettable Fire or Viva La Vida, you'd be wrong. This is more like Remain In Light at 45 RPM. Kuti explains that it's not like Eno changed the songs themselves (though he did contribute keyboards and vocals), but would strengthen passages of tracks like "Mr. Big Thief' by having the melody played in unison by Kuti's sax and guest Justin Adams's guitar.... [Exclaim]

Purchase the album on Amazon as LP/CD/MP3. Updated Seun tour dates below...