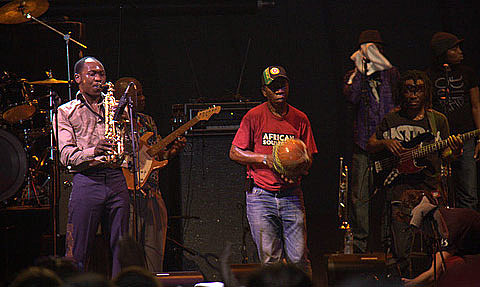 A sizable crowd braved the 100 degree heat Friday night for Seun Kuti and Egypt 80's Celebrate Brooklyn show. Faaji Agba, a collective of Nigerian musicians, opened the night with a set of laid-back traditional tunes. By comparison, the Egypt 80 set was anything but laid back. Steamy music for a sweaty evening in Prospect Park.

The band first took the stage without their frontman for a warm-up song to set the mood. Though it was Seun's name on the bill, Fela's presence was felt throughout the evening. Egypt 80 used to be Fela's backing band, and in the introduction, the bandleader referred to Seun as "the last son of our hero, Fela Anikulapo Kuti." From there, another Fela tribute followed: a 10-plus minute version of "Zombie," probably Fela's best known song. Seun played the opening lick and took a moment to glance at the audience for a hint of recognition, which came in cheers and applause. The song was an early highlight, and an example of Seun's highly theatrical performance style.

During "Zombie," the singer moved in circles, pantomiming the lyrics of the chorus by marching across the stage, saluting, etc. Later on, he took care to water the stage aka his weed garden on "The Good Leaf," and sprint from side-to-side on "You Can Run." His active presence made for good viewing, though his moves often put his back to the crowd.

While Seun was the visual focus, the band's sonics centered on the Afrobeat rhythm. In addition to the kit drummer, the group's percussionists included musicians on shekere (that's a dried gourd with beads on the outside), wood block and congas (or a set of similar drums). Those three performers stood up front, at times blocking out the other band members (like the backup singers, stuck way in the back).

After the opening Fela tune, it was all Seun originals, mostly off the new From Africa with Fury: Rise: "African Rulers," "Giant of Africa," "Rise," "Mr. Big Thief," and the finale, "You Can Run." The ending--no encore because of park curfew--seemed abrupt, with the last song's soaring horns and charging rhythms marking the show's peak to that point.

The band should get more time to stretch out at their more intimate show at SOB's tonight (Wednesday, July 27th). Tickets are still on sale. More tour dates and info HERE. Video of "Zombie" from the Brooklyn show below...