Ish of Shabazz Palaces at Sasquatch (more by Chris Graham) 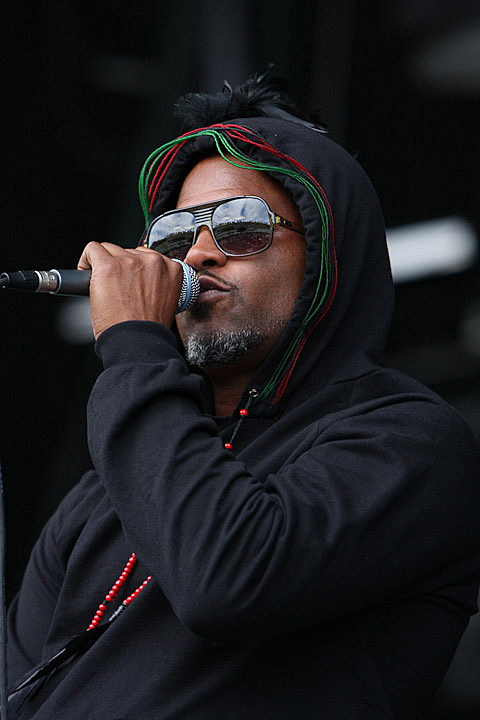 There have been many projects and solo albums in the days following the (original) fall of Digable Planets, but now Ish is breaking out with his killer new Seattle-based project Shabazz Palaces. The group has only been playing limited dates so far (pics from Sasquatch 2010), but will play three shows in October including NYC's American Museum of Natural History for "One Step Beyond" on Friday, October 15th with the great Blockhead on support. Tickets are on sale.

The show is one of a greater set of dates for Blockhead. All dates for both are below.

Shabazz Palaces have released a couple of EPs during their short existence, and are prepping a new LP for release on Sub Pop in 2011.

"I think we both have a lot of love, appreciation, respect and energy for music and for each other. Recognizing the fact that business is necessary for maximizing exposure to it, I think we mutually feel that doing business is less a 'job' and more an opportunity to exercise those feelings in dope ass ways. Shabazz, we bring a distinct hip-hop mentality from left to Sub Pop, which has established itself wide and deep in r&r from that same field. So, it's going to be cool to see what gets born from rolling together. And, of course, Seattle is the immeasurable muse, the backdrop, backbone, the foundation to how we all get down. So SP feels a lot of pride around this partnering-up as well. The people, the office, the deal, it all feels super plush. So stay tuned, it's 'bouts to be on."-The Palaceer, Shabazz Palaces.

Stream material from their two EPs below.

Meanwhile Digable Planets, which is -according to their myspace- "Doodlebug AND Butterfly" (but no Ladybug), is scheduled to play SOB's on Thursday (9/23), their only current tour date. Tickets are still available.

Dig on some streaming audio from Shabazz Palaces's previous EPs, as well as a recent video for "Belhaven Meridian", with all dates, below.