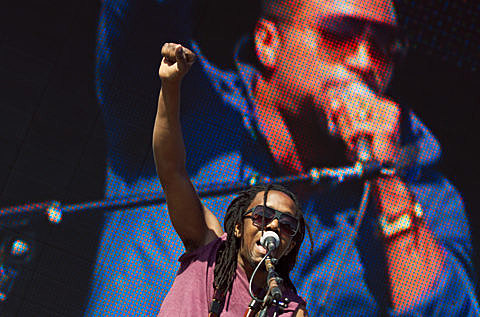 Shabazz Palaces are beginning to reveal dates for a North American tour they'll head out on this spring. The whole thing hasn't been announced yet but so far there's a Chicago show, a NYC show happening on April 13 at S.O.B.'s and a few others. Tickets for the NYC show go on sale Tuesday (1/31) at noon. All currently known North American dates below.

In related news, Shabazz Palaces collaborators and Sub Pop labelmates THEESatisfaction are releasing their debut LP, awE naturalE, on the label on March 27. They recently released a song, "Do You Have Time," which won't be on the album, but you can grab it via a widget below. Their only scheduled dates at the moment are hometown shows in Seattle and SXSW.

In other Sub Pop-signed-rapper news, Spoek Mathambo will release his sophomore LP, Father Creeper, on the label on March 13. Grab the album's lead track, "Let Them Talk," via a widget below. According to his website, SXSW, CMW & NYC dates coming soon.

All dates and widgets below...