Shabazz Palaces in Williamsburg Park in 2012 (more by David Andrako) 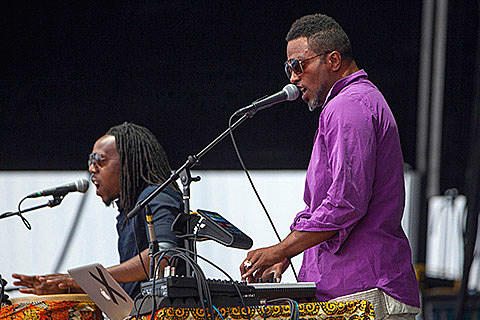 Avant-rap group Shabazz Palaces are releasing their much-anticipated sophomore album, Lese Majesty, on July 29 via Sub Pop, and they've just released another track from it, "#CAKE." It comes with a visualizer which you can watch/listen to below.

Shabazz have also announced dates including some with fellow Sub Pop rap group clipping.. Both Shabazz Palaces and clipping. will be in NYC for the free AfroPunk Festival in Commodore Barry Park, which goes down from August 23-24 (they play day 1). The rest of the lineup hasn't been announced yet, but if you want to skip the line you can buy fast pass admission.