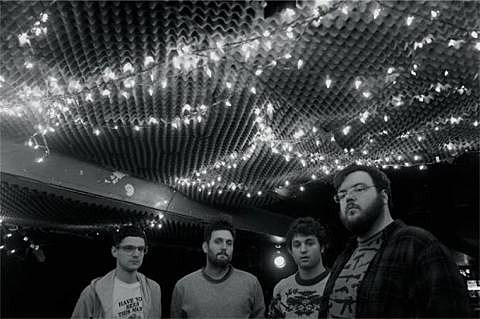 It's summer and sharks are on the brain. Did you watch Sharknado last night? Mia Farrow did. Meanwhile, Brooklyn indie quartet Shark? have been fighting the good fight for about four years now, and continue to gig a lot. You have probably seen them, or maybe just missed them.

The band have just wrapped up their new album, Savoir, which will be out this fall on Old Flame (also home of Potty Mouth). You can download the appropriately summery (with a hint of thunderstorms) first single, "California Girls," above and watch the video below. You can pre-order Savior via the band's PledgeMusic campaign which has three days left.

As mentioned, Shark? play with labelmates Potty Mouth, plus headliners Caged Animals and TOONS (that's a really good line-up) at Shea Stadium on July 25. No advance tickets for that one, and it's currently Shark?'s only upcoming show.