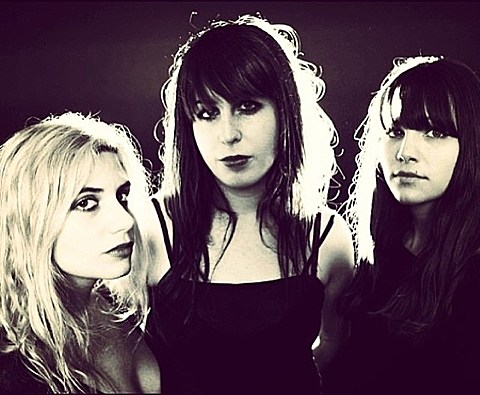 Brooklyn garage rock trio Sharkmuffin are a newer band, but sound straight out of the garage rock boom of the last decade. Picture something between Yeah Yeah Yeahs and Sahara Hotnights and you'll get an idea. They recently put their new EP 1097 and made a video for the full thing, which you can watch below. We've also got the premiere of a track that didn't make the EP, "Shrunken Head," which you can listen to below as well.

Sharkmuffin have a tour coming up with another quality Brooklyn trio, Dead Stars. That tour includes Dead Stars' LP release show on June 19 at Union Pool with Slothrust and Overlake. No advance tickets at the moment.

Before that though, Sharkmuffin play the She Shreds Magazine issue release party on June 5 at Shea Stadium with White Mice and Slothrust (tickets); a New Music Seminar showcase on June 10 at Cake Shop with Honduras, The Venetia Fair and Desert Sharks; a Northside Festival showcase on June 13 at Matchless with Vulture Shit, Whiskey Bitches, J.A.C.K. and White Mystery; and Slack Gaze Fest at 94 Evergreen on June 20 with Honduras, Life Size Maps, Kissing Is A Crime and more.

After the tour, they have more local shows, including Death by Audio on July 25 and Cake Shop on August 3. Full lineups TBA for those.

All dates are listed, with the new song stream and EP/video stream, below...