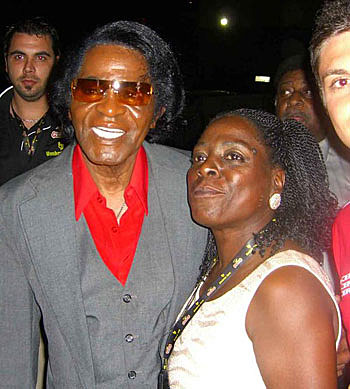 Sharon Jones & The Dap Kings' new album 100 Days, 100 Nights is streaming in its entirety over at AOL (along with the new Stars, Jose Gonzalez, Devendra Banhart, Shocking Pinks and others). The album actually comes out next week (Oct 2) which is also when they'll two very special album-relase shows - there's the previously announced one at The Apollo Theatre in Harlem (Oct 6) (tix), and there's the one on the actual release date in a store.

Go to that. Go to Apollo, and maybe even go to Apollo for free. I have one pair of "great seats" to giveaway to one lucky winner who emails BVCONTESTS@HOTMAIL.COM (subject: Sharon), and tells me one artist besides Sharon to have recorded at Daptone Studios. Winner will be picked at random and notified. Included your first and last name.

And to hear Sharon Jones sing "It Hurts to Be Alone" by Bob Marley, head over to Entertainment Weekly. Tour dates below...