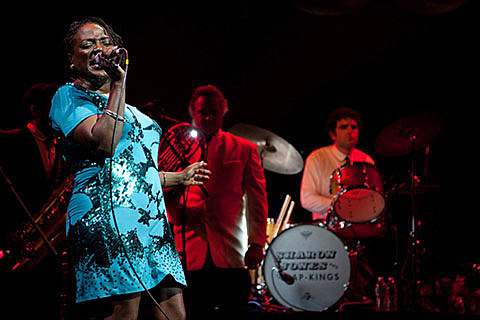 Sharon Jones & The Dap Kings are probably in an airport or mid-air right now, as the band kicks off their European tour tomorrow with a TV appearance in Germany. The following European dates will take them through the first week of Novemeber, when the band will head home and then get ready to head back out on the road. This time Australia is the target. The band will be there for the better part of the month of December.

That's a fair bit of time on the road, but even with all that jet-setting, the band will still make time to appear in their native NYC to celebrate the New Year with a pair of shows at Best Buy Theater on 12/30 and 12/31. Best Buy Theater, formerly Nokia Theater, is in fact in Times Square (aka 12/31 is a Times Square New Years Eve show - be prepared) . Tickets are currently on fan presale (password "SJDK") as well as on AMEX presale (12/30 here, 12/31 here) and will go on sale to the public at noon on Friday (10/22).

While we have your attention, check out Sharon Jones & the Dap-Kings performing as the house band on Night of Too Many Stars a Comedy Central special Benefit Show for Autism Education. The program airs Oct 21, 2010 and is hosted by Jon Stewart and filled with performances, sketches and short films from an amazing roster of comedy all-stars including Steven Colbert, Tina Fey, Ricky Gervais, and Sarah Silverman.

AND, the band recently starred in a short film for Director Philip Di Fiore entitled Game Gets Old: the Trilogy. Check out a recent interview with Sharon Jones about the short, and dig on the whole thing, as well as all tour dates, below.