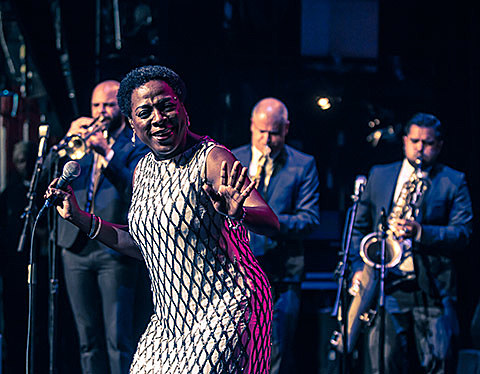 We are sad to report that Sharon Jones' cancer has returned, news she broke at the 2015 Toronto Film Festival on Friday (9/11) where she was to help promote Miss Sharon Jones!, a new documentary of which she's the subject. "I start chemo on Wednesday," she told the crowd. "But I'm gonna keep fighting. We got a long way to go." Jones was diagnosed with cancer in 2013, but with surgery and treatment was declared cancer-free in February of 2014. Our thoughts are with you Sharon, and we're wishing you a speedy and full recovery.

Staying positive: Miss Sharon Jones! was made by acclaimed filmmaker Barbara Koppel (Harlan County, USA) and follows the soul singer for a year as Jones and The Dap Kings try to work around Jones' treatment to complete their 2014 album Give the People What They Want and prep for its ensuing world tour. The documentary will make its New York debut at the 2015 DOC NYC fest as the opening night film, screening November 12 at the SVA Theatre. Ticket info is TBA.

Meanwhile, Sharon Jones & the Dap Kings will have a new holiday album, It's A Holiday Soul Party, that's out October 30 via Daptone. They've also got songs on the forthcoming Daptone Gold Vol. 2 which is out this Friday (9/18). And, for now at least, Jones & the Dap Kings are continuing to tour, including this weekend's Telluride Blues & Brews Fest. Other dates on the later horizon include one at the New Jersery Performing Arts Center on November 14 with Diane Reeves (tickets). All scheduled dates are listed below.