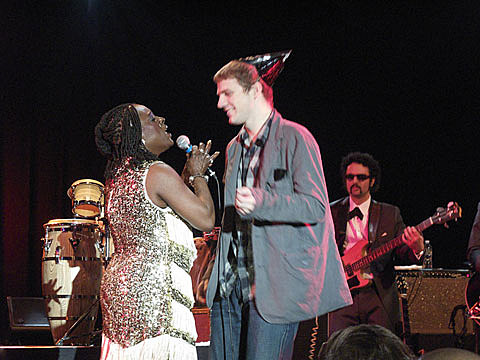 "The disarming warmth of the Dap Kings' homegrown sound translated well in the 2,100-capacity venue. Against the usual Dap Kings backdrop of bright horns and funky percussion, Jones sustained her boundless energy level for much of the two-hour performance. At one point, she even kicked off her high heels and summoned African ancestors for a shamanistic dance medley.

The band was fully synchronized from the opening number, the slinky ballad "If You Call" to a propulsive rhythmic buildup for an encore rendition of "100, Days, 100 Nights." Some of the night's finer moments, of course, alluded to economic hardships. The horn stabs of "Money" and "No Chimmeys in the Projects" carried a raw sense of urgency, while Jones cracked, "Ain't nothin' evil about money because we neeeeed that money." After a suitably cool take on "Auld Lang Syne," Jones pushed herself vocally to wring a double meaning from "Better Things."

"I've got better things to do than remember you," Jones sang. Puffs of fog machine smoke framed her band as balloons and confetti filled the room.

Warming up for Sharon Jones and the Dap Kings was New Orleans songwriter Allen Toussaint.

"There's no place I'd rather be tonight. I really mean it," Mr. Toussaint said." [Soul Train]

Hopefully you've fully recovered from New Year's Eve because the Lee Fields & The Expressions soulful throwdown hits Bowery Ballroom TONIGHT (1/7) with Michael Leonhart & The Avramina 7. Tickets are still available, or you can roll the dice and try and win one of the pairs of tickets that we have to give away. Details are at the bottom of this post.

As previously discussed, fellow Daptone-r Charles Bradley (who shared a bill with Lee Fields in Brooklyn recently) will celebrate the release of his new album No Time For Dreaming at Southpaw on January 25th. Tickets are still available. The date comes right in the middle of a tour Charles is going on with Sharon Jones & The Dap-Kings (who played 12/30 & 12/31 at Best Buy Theater). A review from the 12/31 show is quoted above.

Bradley's new video for new-album song "The World (is Going Up In Flames)", contest details and all dates below...

==
Charles Bradley - The World (Is Going Up In Flames)

LEE FIELDS AND THE EXPRESSIONS - MY WORLD

=============
To win a pair of Lee Fields tickets, e-mail BVCONTESTS@HOTMAIL.COM (subject: Lee Fields!). Include your first and last name in the email. Winners will be chosen randomly and contacted with instructions. Good Luck!