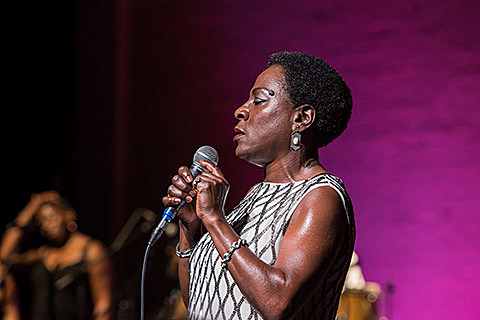 Sharon Jones' cancer sadly returned but she's still fighting and touring soon. When we last posted, her schedule included a couple shows just outside of NYC (Newark and Tarrytown) and now it's got one happening in the city.

Sharon and the Dap-Kings play this year's WFUV Holiday Cheer show at Beacon Theatre on December 4 with Brandi Carlile & Friends and Dawes. They'll be playing songs off their upcoming holiday album, due 10/30 via Daptone. Tickets for that show are on WFUV, local and Chase preasles now (password = SOCIAL) and the general on-sale starts Friday (10/23) at 10 AM. All dates are listed, with a stream of the Dap-Kings' recently released single "Thunderclap," below.

Also as discussed, the US premiere of her new documentary Miss Sharon Jones! happens in NYC on November 12 at SVA Theatre. Tickets are on sale now.

In other Daptone news, NYC afrobeat band The Budos Band have announced a hometown show for December 12 at Warsaw. Tickets for that show go on sale Friday (10/23) at noon. Their only other date we're currently aware of is in San Francisco this November.

As you may know, fellow NYC Daptone afrobeat band Antibalas have an upcoming hometown residency happening October 28, November 4, 11, and 18 at Brooklyn Bowl with different guest each night. Since we last spoke, soul singer (and Daptone associate) Lee Fields was revealed as the guest for the final night. The other guests are The Funk Ark (10/28), EMEFE (11/4) and Superhuman Happiness (11/11). Tickets for all four are still available.

And lastly, another soul singer, Daptone artist and Budos Band collaborator, Charles Bradley, also has some shows coming up. One is in the NYC-area, opening for Trombone Shorty & Orleans Avenue at Port Chester's Capitol Theatre on December 30. Tickets for that show are on sale now. He's also got some shows with Grace Potter, and he plays New Year's Eve in DC. All dates are listed below.