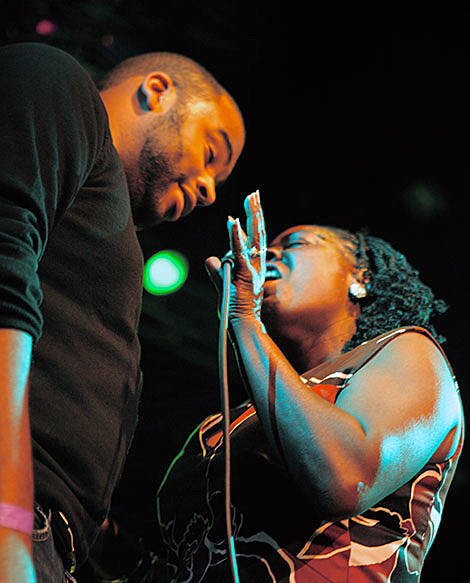 Belting out such lyrics as "I can't have my cake and eat it too, so I gonna get up and walk out on you," funk-soul luminary Sharon Jones sounds like anything but a goody two-shoes. But like many divas before her, she was an angel when she discovered her pipes.

"I was somewhere between 5 and 8 years old when I played an angel at church, an itty-bitty angel with wings and a halo over my head," she recalls. "One time we did 'Silent Night,' and a lady at church said, 'Ooh-ooh, that little girl can sing.' That's where it all began." [The Isthmus Paper]

Sharon Jones & The Dap Kings' next two NYC shows will take place at the Nokia Theatre in Times Square on February 13th and 14th. $35 tickets go on sale Friday at noon, or on Wednesday if you have an American Express.

In other Daptone news, Sharon Jones & The Dap Kings appear on that new Red Hot comp, Budos Band & Naomi Shelton are playing Mercury Lounge on December 19th, and the Menahan Street Band have a show coming up at Southpaw on December 20th. All Sharon Jones tour dates below...