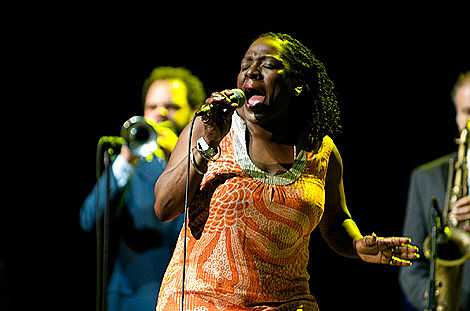 "The new six-part IFC Original Series, DINNER WITH THE BAND is the first alternative cooking show combining culinary delights, musical performances and conversations with some of today's most acclaimed indie rock artists.

On DINNER WITH THE BAND, Sam Mason, the tattooed and celebrated NYC chef (Tailor, WD-50), invites a band to his Brooklyn loft where he shows them how to add his signature culinary spin to their favorite "on-tour" food. In the meantime, Chef Mason and the artists converse on food, music, and life while cooking together. After they "chow down" they "get down" as each act takes to the loft's stage to play a rockin' musical set.

Chef Mason, who recently took on Iron Chef Morimoto on Iron Chef America, is the former pastry chef of New York's WD-50 and current proprietor of SOHO's contemporary dining and cocktail parlor, Tailor. A modern day pioneer of avant-garde cooking and a James Beard nominee, Mason brings a casual approach to his dishes that stimulate the palate as well as the dialogue.

DINNER WITH THE BAND will debut on IFC in November 2009."

IFC recently picked up Dinner With the Band which was previously made just for the Internet.

Sharon Jones and the Dap Kings have a handful of shows scheduled between now and the end of the year, and one of them is taking place at Starland Ballroom in Sayreville, NJ on December 5th. Tickets are on sale. All dates below...