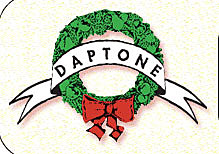 Christmas? Soul? Christmas Soul! Here you go, kids: Sharon Jones' debut holiday song! In this self-penned little jingle-jangler, Sharon takes us back to her childhood, where as a young girl in the projects of Brooklyn she wondered how Santa was ever going to bring her any toys when clearly, "There Ain't No Chimneys in the Projects." As she soon finds out, the true miracle of Christmas was no fat man shimmying down heating ducts, but rather the love with which her own mother had been secretly tucking those presents under that tree. Awww. With a little help from Sharon's backup singers and some tasty violin runs offered up by the Bushwick Philharmonic, the Dap-Kings lock into their usual nasty little pocket and the groove blossoms like a soulful red pointsettia beneath Sharon's story. The flip gives Daptone mouth-man Binky Griptite an instrumental taste overwhich he lays down a heartfelt holiday message of tolerance and togetherness. Right on, Santa!

That description describes one of the best holiday gifts that I received this holiday season so far, and that is the new Daptone Records holiday single! Purchase the 45 on their website, or get it free when you order $30 of other stuff, and/or download the songs for free above!

BUT THAT'S NOT ALL: Sharon Jones and the Dap Kings have added a Brooklyn show. BUT THAT'S NOT ALL: That Brooklyn show is just a week away, in 2009, and in a bowling alley. It'll probably put all the New Years Eve events happening one night later to shame, and it's only $20 (translation: Sharon Jones is playing Brooklyn Bowl on December 30th!) (get tickets) (they play New Years Eve also, but in DC.)

Sharon Jones & The Dap Kings recently played a private and super fancy Urbandaddy holiday party, and not long before that they played a show at Starland Ballroom in NJ. A couple of videos from the Jersey show with all tour dates below...