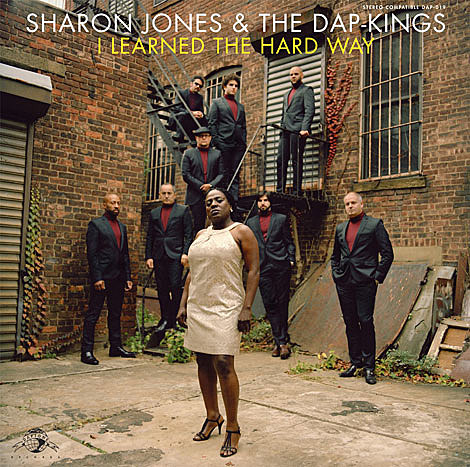 On Sharon Jones' birthday this year [May 4th], the band will release I Learned the Hard Way, their fourth full-length on Brooklyn's independent Daptone Records. The record marks a bold step forward for a band who almost singlehandedly stewarded today's return of soul music to its more traditional sound.

I Learned the Hard Way was produced by Bosco Mann and recorded on an Ampex eight-track tape machine by Gabriel Roth in Daptone Records' House of Soul studios, the record drips with a warmth and spontaneity rarely found since the golden days of Muscle Shoals and Stax. Sharon's raw power, rhythmic swagger, moaning soulfulness, and melodic command set her firmly alongside Tina Turner, James Brown, Mavis Staples, and Aretha as a fixture in the canon of soul music. From the lush Philly-Soul fanfare that ushers in "The Game Gets Old" at the top of the record, to the stripped down Sam Cooke-style "Mama Don't Like My Man" at the tail, the Dap-Kings dance seamlessly through both the most crafted and simple arrangements with subtlety and discipline.

Check out the cover art featuring a photo taken by BV photographer Jacob Blickenstaff. Tracklist for the new album below...