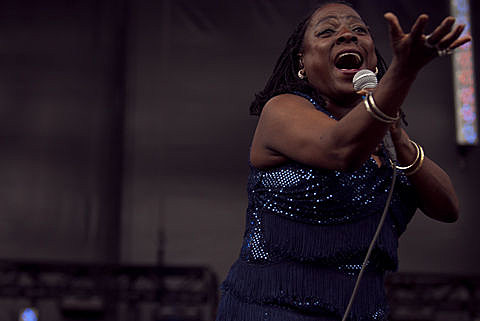 Sharon Jones & The Dap Kings have been making booties shake across the continent and will continue to do so through the bulk of the fall, eventually looping back to New York for SEVEN shows, FOUR of which are in NYC. On December 6th and 7th the band will hit Music Hall of Williamsburg in Brooklyn. Then after shows in Tarrytown, Oneonta & Syracuse, they return to the city to play December 13th and 14th at Bowery Ballroom. Tickets for all four NYC shows go on AmEx presale at noon on Wed (10/5) with regular sale hitting two days later. All dates are listed below.

Sharon Jones will compete with their West Coast touring partners My Morning Jacket on 12/14 when the Louisville band headlines Madison Square Garden with Band of Horses. Tickets are still available.

All tour dates and some recent live videos, below...