Sharon Jones at Bowery Ballroom in 2011 (more by Tamara Porras) 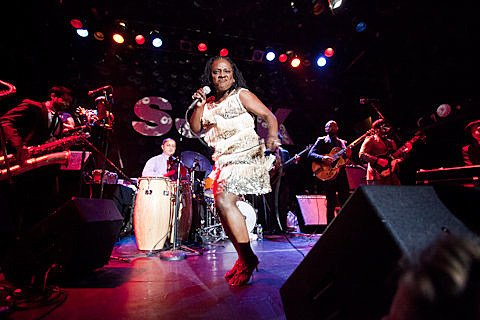 Sharon Jones & the Dap Kings have a bunch of shows and festival appearances scheduled this summer and they've just announced that they'll be playing Williamsburg Park on August 18 with openers Antibalas. That show falls directly in between the Jane's Addiction (Aug 17) and My Morning Jacket (Aug 19) shows at Williamsburg Park. No word on an on sale yet but keep an eye on Ticketmaster. UPDATE: It's a free show, folks!

In other news, openers Antibalas, who have been busy for the last few years with the Fela! musical, are set to release their first album since 2007. The self-titled LP is due out August 7 on Daptone Records.

All Sharon Jones and Antibalas dates are listed below...