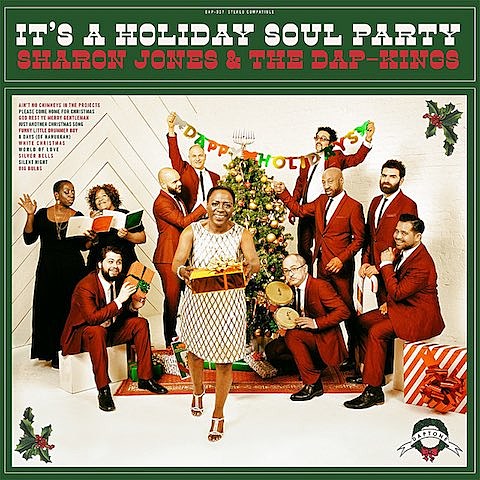 Sharon Jones and the Dap-Kings just released It's a Holiday Soul Party, which features a mix of covers and originals, including their previously-released "Ain't No Chimneys in the Projects," and a song called "8 Days (Of Hannukkah)."  They've just shared a video for "White Christmas," which you can watch, along with a stream of the LP via Spotify, below.

In other news, documentary Miss Sharon Jones just had its U.S. premiere at DOC NYC Fest last week, and she and the Dap-Kings have some shows and appearances coming up, both holiday-related and not. They're playing that WFUV Holiday Show with Brandi Carlisle and Dawes at the Beacon Theatre on December 4 (tickets). They'll also be playing the Tibet House Benefit on February 22 at Carnegie Hall with Iggy Pop, Basia Bulat, FKA Twigs and others. And they will be opening for Hall & Oates at MSG on February 19. Tickets for that are still on sale.

All Sharon Jones tour dates are listed, along with the "White Christmas" video and holiday album stream, below.