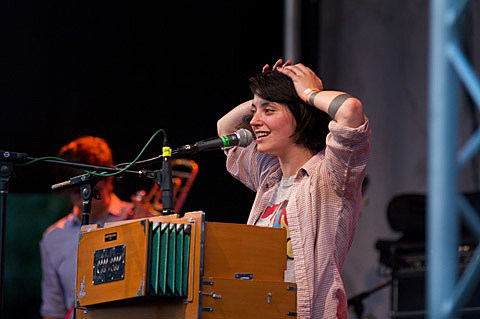 Brooklyn singer/songwriter Sharon Van Etten has done a fair amount of impressive stuff since hitting the scene. She's released two amazing albums and contributed vocals to The Antlers' Hospice and to Beirut's upcoming LP The Rip Tide. Now she's working with Aaron Dessner of The National (who she recorded a track with for the movie Win Win) on her new album. We've just learned that album will be coming out in early 2012 on Jagjaguwar, home to Bon Iver, who covered Van Etten's "Love More" (congrats Sharon!).

Sharon has a few shows coming up in September including Bumbershoot and a September 23rd show in Philly. All dates and two recently posted videos: one of Kyp Malone of TV on the Radio talking about her, and another of her dueting with her labelmate Justin Vernon, below...

Sharon van Etten and Justin Vernon duet
Sounds of the South musicNOW May 13, 2011