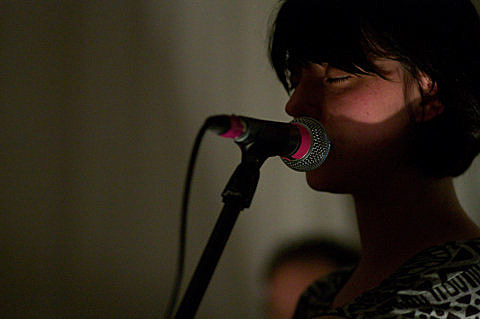 Sharon Van Etten, who recently opened for and played with The National, contributed backing vocals to a song The National wrote for the movie "Win Win". That song, "Think You Can Wait", is on the shortlist of 39 songs eligible to be nominated for an Oscar. That list, reprinted in full below, also includes songs by Jonsi and She & Him.

In other Sharon news, after the show sold out today, it was revealed that she is the secret guest playing with Ted Leo at Maxwell's on New Year's Eve! (not the first time they've shared a bill). She's also appearing on WNYC's Soundcheck on January 17th. You can buy tickets to attend the afternoon taping at the Greene Space. You can also still buy tickets for other shows she has coming up which will be in support of her new album.

The Oscars Best Song Shortlist
"The World I Knew" from "African Cats"
"Lay Your Head Down" from "Albert Nobbs"
"Star Spangled Man" from "Captain America: The First Avenger"
"Collision of Worlds" from "Cars 2"
"Dakkanaga Dugu Dugu" from "DAM999"
"DAM999 Theme Song" from "DAM999"
"Mujhe Chod Ke" from "DAM999"
"Rainbird" from "Dirty Girl"
"Keep On Walking" from "The First Grader"
"Where the River Goes" from "Footloose"
"Hello Hello" from "Gnomeo & Juliet"
"Love Builds a Garden" from "Gnomeo & Juliet"
"Bridge of Light" from "Happy Feet Two"
"The Mighty Sven" from "Happy Feet Two"
"Never Be Daunted" from "happythankyoumoreplease"
"Hell and Back" from "Hell and Back Again"
"The Living Proof" from "The Help"
"Coeur Volant" from "Hugo"
"It's How We Play" from "I Don't Know How She Does It"
"When the Heart Dies" from "In the Land of Blood and Honey"
"Ja Nao Estar" from "José and Pilar"
"The Keeper" from "Machine Gun Preacher"
"Life's a Happy Song" from "The Muppets"
"Man or Muppet" from "The Muppets"
"Pictures in My Head" from "The Muppets"
"Summer Song" from "The Music Never Stopped"
"Imaginary Friends" from "Olive"
"Sparkling Day" from "One Day"
"Taking You with Me" from "Our Idiot Brother"
"The Greatest Song I Ever Heard" from "POM Wonderful Presents The Greatest Movie Ever Sold"
"Hot Wings" from "Rio"
"Let Me Take You to Rio" from "Rio"
"Real in Rio" from "Rio"
"Shelter" from "Take Shelter"
"Gathering Stories" from "We Bought a Zoo"
"Pop" from "White Irish Drinkers"
"Think You Can Wait" from "Win Win"
"The Backson Song" from "Winnie the Pooh"
"So Long" from "Winnie the Pooh"