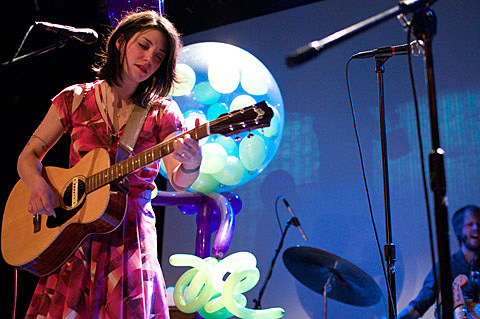 Sharon Van Etten is on tour now and as discussed, that tour hits NYC on November 15 at Town Hall. At that show, Sharon will be joined on stage by a number of guests, including Thurston Moore, John Maloney, and a handful of her usual friends/collaborators Aaron Dessner (The National), Jenn Wasner (Wye Oak), Peter Silberman (The Antlers), and Brad Cook (Megafaun). Tickets for that show are still available.

In other news, Sharon is releasing a deluxe edition of her 2012 album, Tramp, on November 13 via Jagjaguwar with demo versions of every song on the album, a bonus demo of "Tell Me," a self portrait, and liner notes from Sharon's journal. Regarding the demos, Sharon just told RedEye, "I'm kind of excited about [the demos] because I'm always interested in hearing where people came from and how they progressed. I believe my songs are strong enough to stand on their own--even way back then when they were recorded badly and minimally."

A stream of the "Tell Me" demo and an updated list of dates are below...