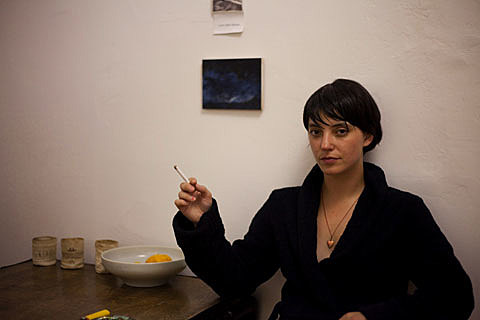 Sharon Van Etten will be putting out her second record, a seven-song collection called Epic, on October 5th through Ba Da Bing. The track above is the last song off that. If you've seen her live recently (like at the Chris Knox Benefit), you may have caught it. In April, the song was covered at the Music Now Fest in Cincinnati by Bon Iver and members of the National. Their version (captured quite blurily) is posted below, as is a stripped-down acoustic rendition by Sharon.

The new record was recorded at Philly's Miner Street Studios and features vocal assists by Meg Baird (Espers), Cat Martino and Jessica Larrabee (She Keeps Bees). A seven-inch is also due this summer on Polyvinyl.

Live, Sharon will be at Zebulon on July 7th to perform with a screening of The Builder. After that she has a pair of shows in Chicago including the Pitchfork Fest, and then a Saturday, August 7th show at Bushwick Starr with Mike Visser. She's also on the schedule for the Panda Bear- & Public Enemy-hosting Hopscotch Festival in North Carolina this September.

Tracklist for the new album, live videos and dates are below...