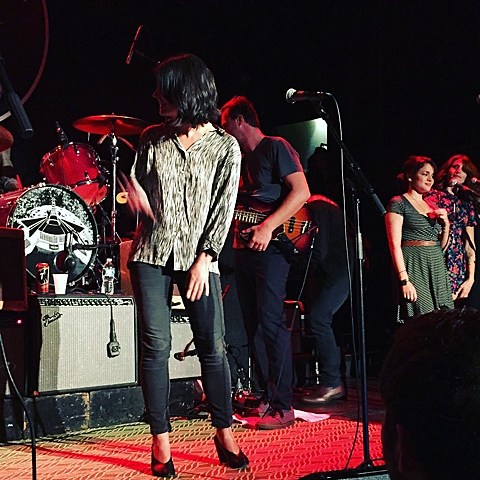 Though Sharon Van Etten was billed for NYC's Neil Young tribute show NeilFest, she didn't show up on night 1. But fortunately for anyone who went last night (9/14), Sharon was there (along with Ryan Adams, Kim Gordon, Norah Jones and many more). There's a picture above.

Sharon covered another folk legend recently too, and released that cover today. She takes on Donovan's "Teen Angel" for the upcoming tribute album Gazing With Tranquility: A Tribute to Donovan that Rock the Cause Records is releasing on October 16 (proceeds go to Huntington's Hope). Sharon offers up a great take on the song, and she tells NPR: "I've admired Donovan's voice and minimal psychedelic songs since I was a child. In the folk world he was still very 'left' and it stood out to me. Even though he was a trippy cat, he was still a romantic and I loved seeing both of those sides."

Also on the album is The Flaming Lips, The Walkmen frontman Hamilton Leithauser, Ivan & Alyosa, Astronautalis, Lissie and more. Check out the full tracklist, and stream of Sharon and Hamilton's covers, below.