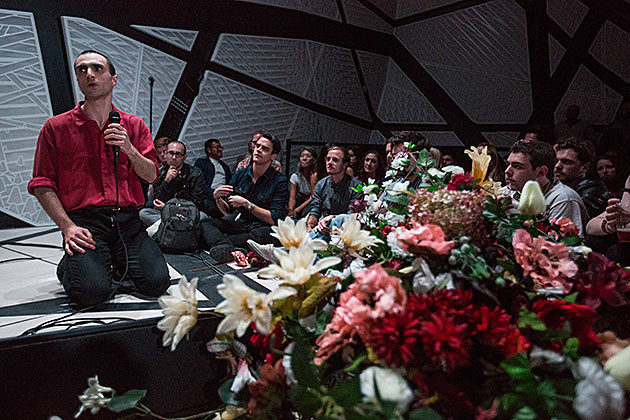 Majical Cloudz start their tour with She-Devils tonight (1/15) in Toronto and they've also just released an EP, titled Wait & See, of songs left over from the Are You Alone? recording sessions. Say the band:

We put together this "EP" of songs that we recorded when we were working on "Are You Alone?", but which didn't fit on that album for one reason or another. They aren't more recent than the songs on AYA -- they date from different periods of time, one of them is among the earliest songs written for AYA and others are more recent. Despite the fact that it's a collection of songs that didn't make the record, I think there is a feeling that links them all together (which is maybe why they didn't fit on AYA). We hope you enjoy these songs!

You can stream the EP via Spotify, below. The Majical Cloudz tour hits NYC on Tuesday (1/19) at Music Hall of Williamsburg. Tickets are still available. The duo have also added Australian shows in February and all tour dates are listed below.

Meanwhile, She-Devils will stick around Brooklyn for an extra day for a free show at Baby's All Right on Wednesday. It's being billed as "She-Devils and Friends" and doors are at 8 PM.

She-Devils also just released their debut EP today, and you can stream the whole thing. If you've heard "Come" and "Where There's No One," you know they work with samples from late-'50s and early-'60s records -- early rock n' roll, exotica, orchestral pop -- and repurpose them into new and modern ways. It's a little red neon David Lynch and quite appealing. Listen below.