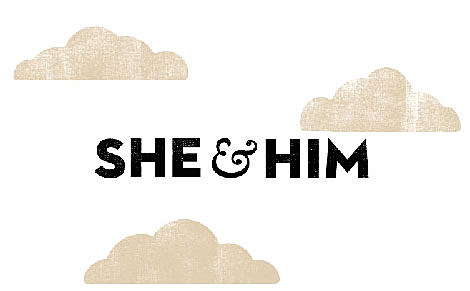 She & Him will release their sophomore album, Volume Two, on March 23rd, 2010 via Merge Records. Written by Zooey Deschanel (She) and produced by M. Ward (Him), Volume Two is the highly anticipated follow up to the duo's critically acclaimed debut, Volume One.

Volume Two makes good on Volume One's musical promise and then some. With eleven original tracks and two covers - "Ridin' In My Car" by NRBQ and Skeeter Davis' "Gonna Get Along Without You" - Volume Two is bigger, bolder and more beautiful than its predecessor... [says them anyway]

In addition to the just-announced Coachella appearance (on sale), and the rumored SXSW one, She & Him will be playing a handul of dates in March after their new album comes out. Those include two nights in a row at NYC's Bowery Ballroom (March 29-30) (Tickets on sale 1/29).

New album tracklist and all dates below...