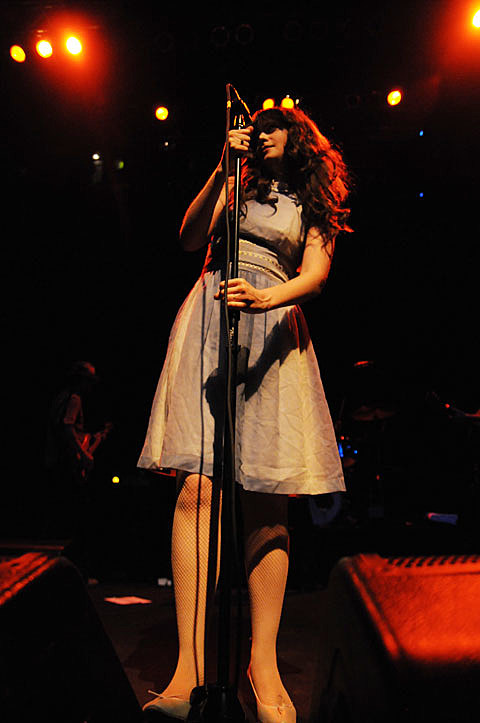 Last night (7/6) She & Him played a sold out show at Terminal 5. The show was the fourth of fourteen stops on their Summer 2010 tour which also included a free show at Governors Island on the 4th of July.

Not long after the doors had opened, the 3,000+ person venue was crowded with concert goers unwilling to stand outside in the near 100 degree heatwave. The audience was full of women wearing light-colored knee-length sundresses in the style of actress and She & Him member Zooey Deschanel.

At 8 p.m., comedian Eugene Mirman took the stage, asking the audience how many of them were aware that the opening act was a comedian and not a musician. While the crowd did not seem particularly impressed with the jokes told during Mirman's 30 minute set, he managed to win over people towards the front of the stage by handing out business cards with ridiculous slogans.

At 9 p.m., She & Him walked on stage to thunderous applause and excitement. For most of their performance, backup vocals were provided by Lily and Abigail Chapin, 2/3rds of the folk-pop group The Chapin Sisters.

Halfway through the set, Zooey Deschanel took a moment to discuss a pet peeve with the audience. "Do you guys know how to turn the flashes off your cameras?" She asked, "I'm not trying to be bossy, but A) it ruins a lot and B) it's bad for pictures. Let us handle the lighting." In fact, Terminal 5's security guards walked throughout the venue very strictly enforcing the "No Pictures" rule for the night.

After an evening full of beautiful music, audience cheers, and Zooey Deschanel jumping around on stage with a tambourine, She & Him returned for a short encore with the show finally ending around 10:30 p.m.

More (legally taken, flash-free) pictures from the show below... 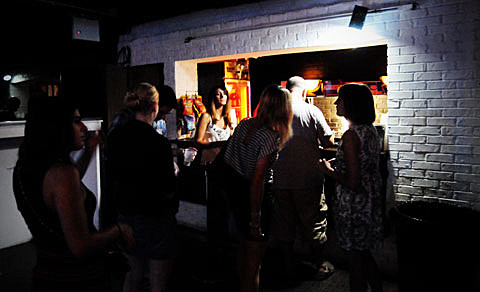 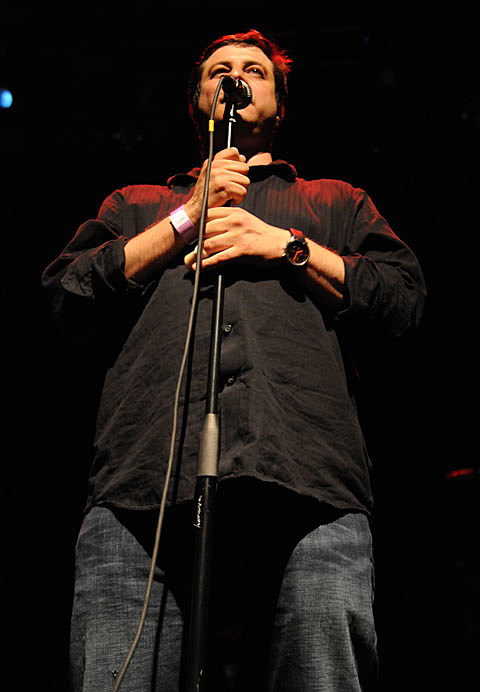 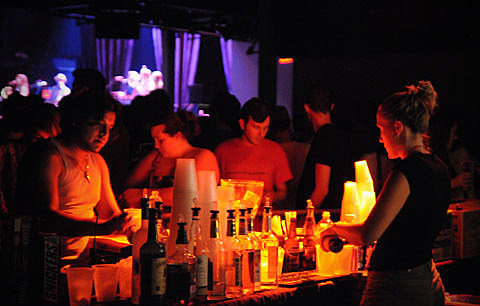 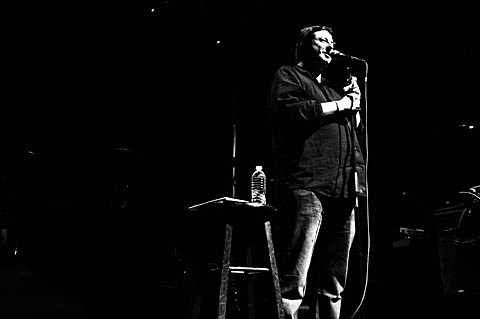 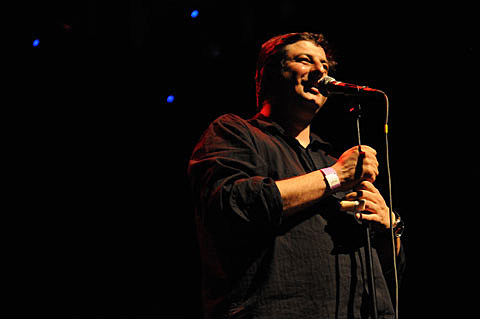 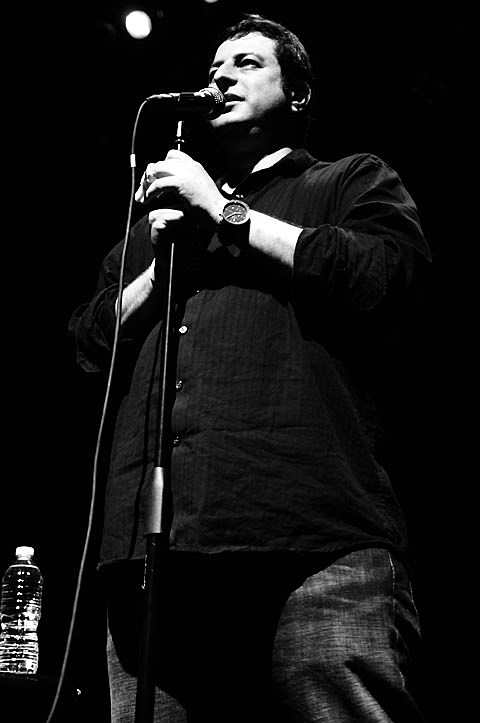 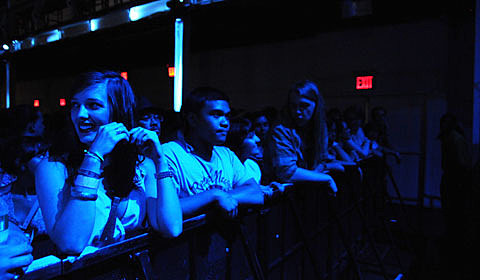 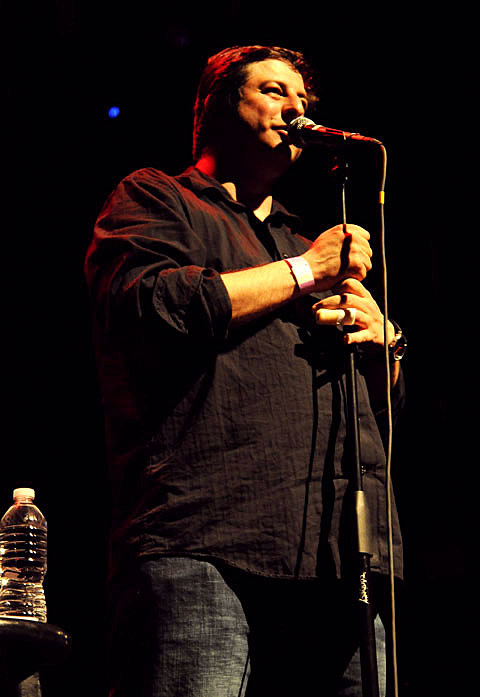 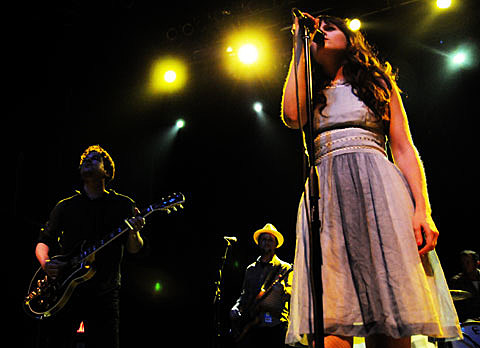 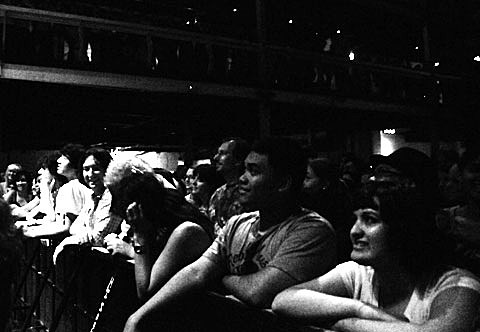 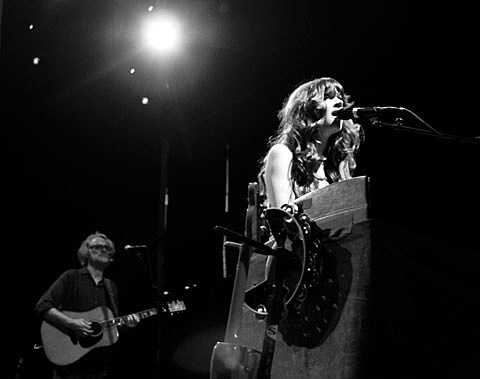 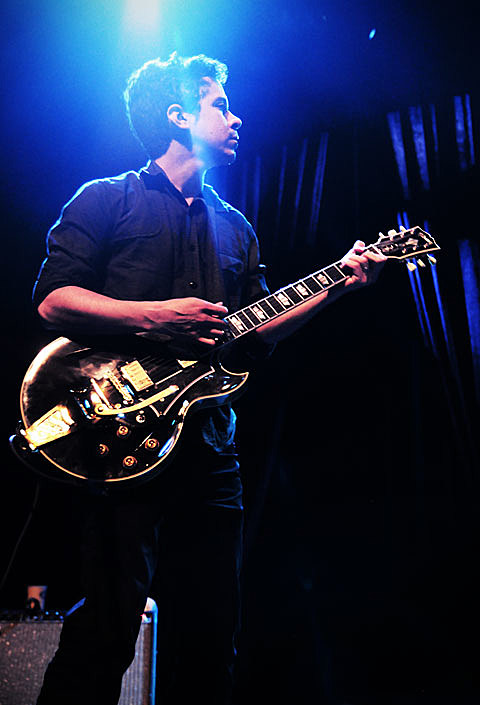 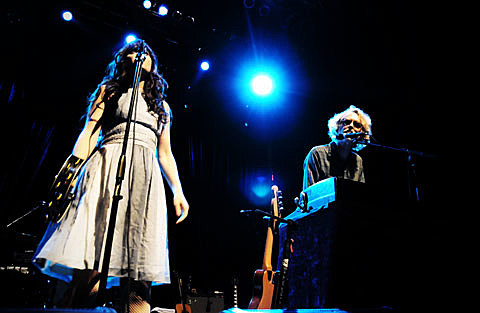 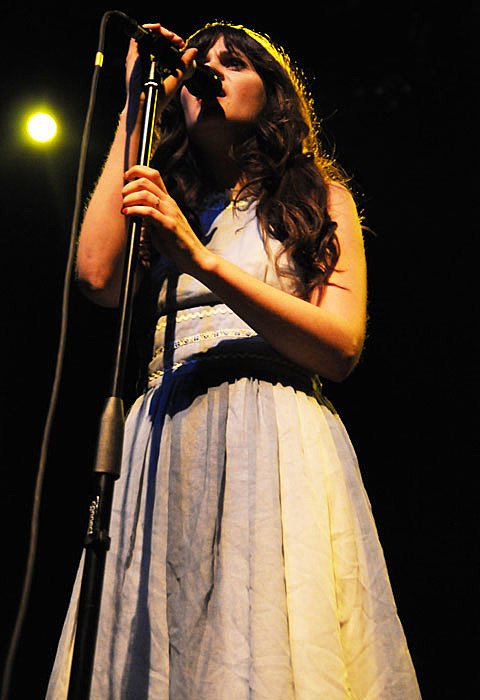 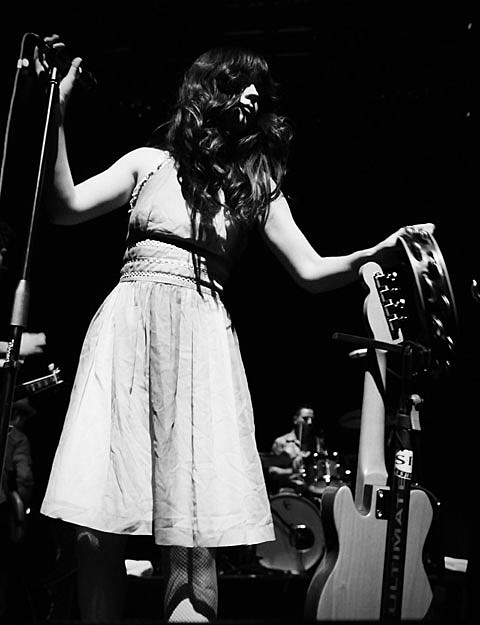 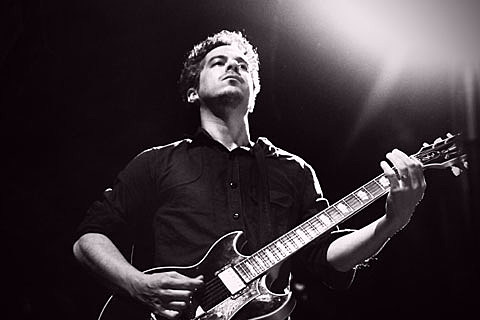 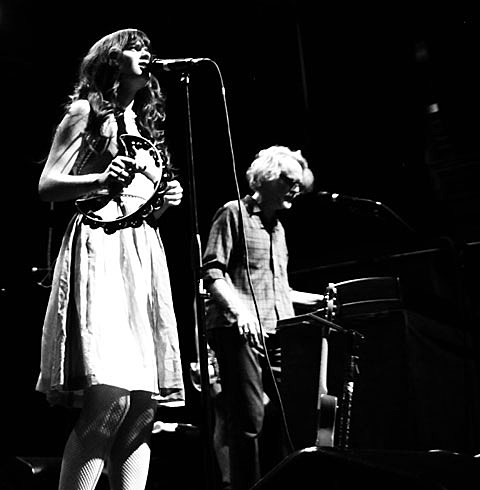 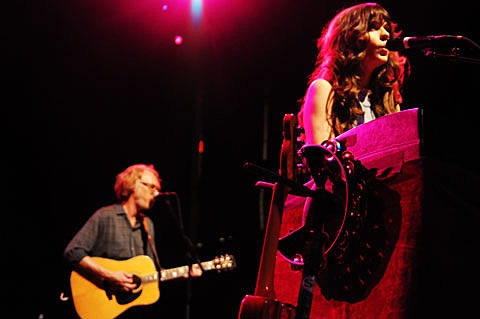 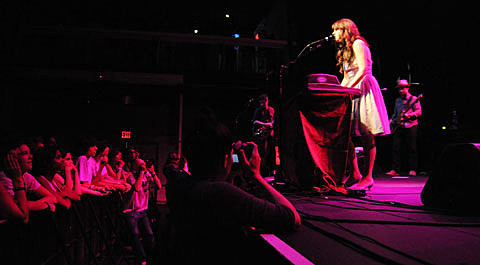 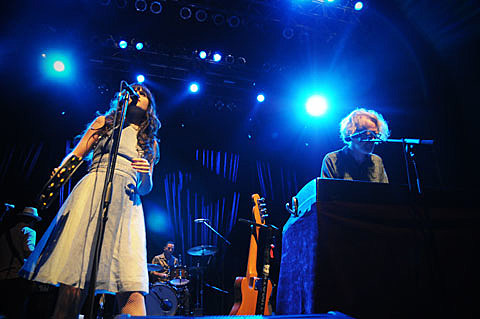 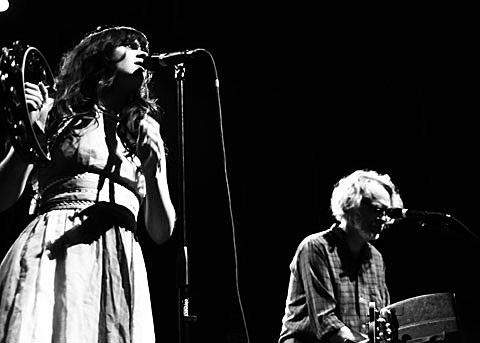 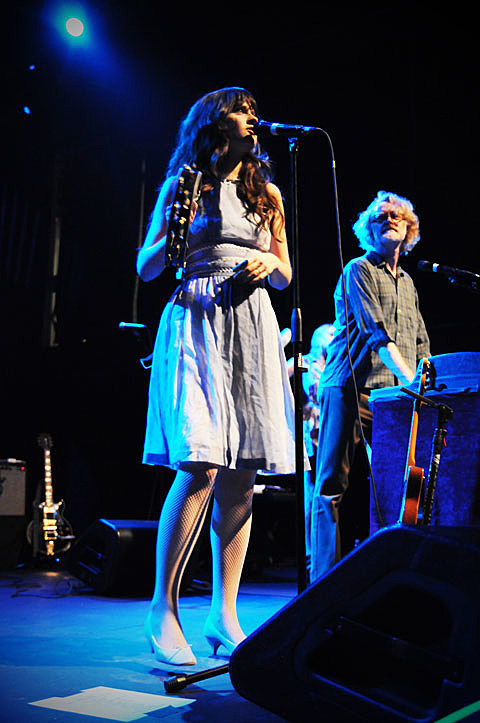 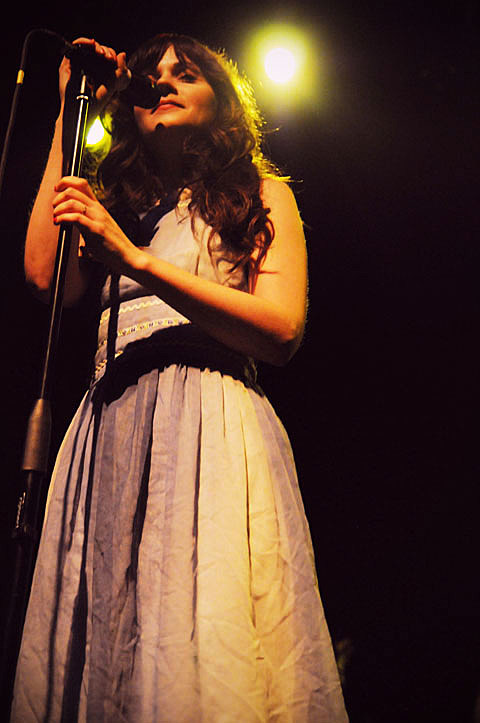 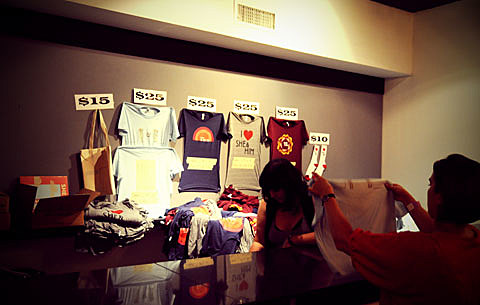