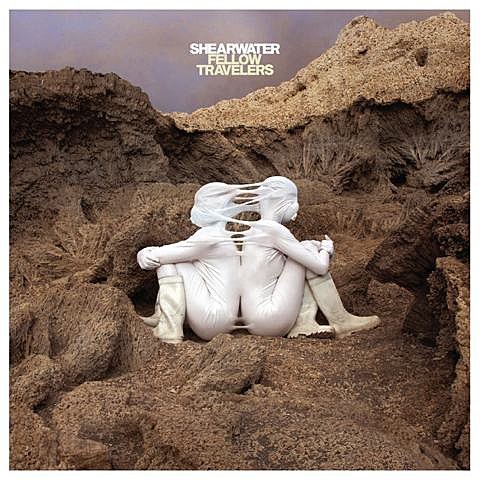 Fellow Travelers wasn't supposed to be a full-length record, so I'm a little surprised to admit that it's my favorite Shearwater album so far. Somehow it slipped under the door.

It was meant to be a small thing, maybe a home-recorded EP, to release between Animal Joy and the next full-length (for which we're in the studio right now). But it took on a life of its own. Re-imagining and renovating songs by the bands we've toured with was like leafing through a scrapbook, and brought back the highs and lows of a decade of touring, from dives in Oklahoma and squats in Slovenia to the Fillmore West, the Bataclan, and the MGM Grand (ask me about that one sometime).

The new Shearwater album, Fellow Travelers, is out November 26 on Sub Pop. It's an album of covers by bands Shearwater have shared the stage with, such as Wye Oak, Folk Implosion, Sharon Van Etten (a song they wrote together for Record Store Day), Coldplay, St. Vincent, Clinic and more. Additionally, many of those artists collaborated on these recordings, though not on their own songs. You can stream Shearwater's take on Xiu Xiu's "I Luv the Valley Oh!" below.

No word on any tour dates yet. But for more on the album, you can read the rest of frontman Jonathan Meiburg's notes on the album -- and check out the tracklist -- below.

Audiences never see most of touring life, and it's the hidden moments that came to mind while we were recording. I thought of Chris Martin, pacing nervously in the bowels of the LA Forum, before the first show of a tour for an album on which EMI had staked its existence; of Brian Campbell, Clinic's indomitable bassist, muttering "I hate these f_____ things" before donning a grimy surgical mask for the thousandth time; of David Thomas Broughton wandering into an audience in Brussels mid-song, knocking things over and falling down, then slipping us a half-smile offstage; of Xiu Xiu hiding stuffed animals and candy in the stacks of a university library for their devoted fans to find; of Sharon Van Etten playing us the rough demos for the album that would put her on the map while she drove our van through the snowy Idaho mountains.

Touring is an expression of faith - in yourself, in your friends, in the hope that the world has a place for you. In that spirit, I invited all the bands we covered to play on Fellow Travelers, with the caveat that you couldn't play on your own song. Almost everyone rose to the bait: Chris from the Baptist Generals turned Clinic's "Tomorrow" into a bewildered, stomping incantation, while Clinic, in turn, infected the Generals' "Fucked Up Life" with drum machines, radio signals, and their trademark combo organ. I added recordings I made of birds and waves in the Falklands to David Thomas Broughton's "Ambiguity", and he sent us a tape he made of sparrows, bulbuls, and the clanking shovels of highway workers in Pyongyang, North Korea (long story), which we spliced into our rock-anthem version of Xiu Xiu's "I Luv the Valley OH!!" And Jenn from Wye Oak, who, like us, had also toured with Lou B, added vocals to "Natural One", our most straight-up reading of the bunch, since I couldn't think of a better way to honor a perfectly-constructed song.

Leon Trotsky, who gave the words "fellow travelers" their political aura, once wrote that "a protest against reality, either conscious or unconscious, active or passive, optimistic or pessimistic, always forms part of a really creative piece of work." Maybe that's why these songs seem like they belong together, to me. Listening back, I get a feeling of common effort, of common purpose, among all of our different musical paths; we've all tried to defy or transform reality in small ways with our music, and to prove it with our performing lives. Playing these songs felt like riding a wave.