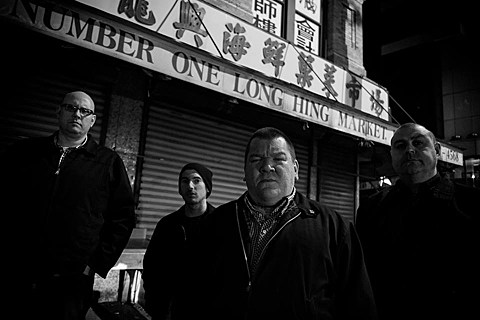 NYHC vets Sheer Terror celebrated their 30th anniversary last year, and they're continuing to go strong. This summer, they'll go on a Rocks Off Cruise on Sunday, August 16 with No Redeeming Social Value. They'll set sail aboard The Jewel, departing from NYC's Skyport Marina at East 23rd St and FDR Drive. Tickets are on sale now.

Another long-running NYHC band (a little more on the metalcore side), All Out War, also have an upcoming hometown show: Bowery Electric on July 28 with Darkside NYC (who were initially formed by Sheer Terror's Alan Blake), SubZero, NYC Headhunters and Sonic Poison. That's a 3 PM Sunday matinee about a month before All Out War play This Is Hardcore in Philly. Tickets are on sale.

That show is the release show for All Out War's upcoming Dying Gods EP, which follows 2010's Into The Killing Fields LP on Victory. The new EP comes out June 23 via Organized Crime Records (pre-order), and features Amebix and Carnivore covers as well as five original tracks. One of those is the chugging, angry "Nothing Left To Bleed" which you can stream below.

In other similar news, '90s-era New Brunswick punks Bigwig, who are a bit more on the melodic side but still have hardcore roots, are playing their first NYC show in ten years on June 18 at Grand Victory with Make War, Slow Children and Up For Nothing. Tickets are on sale. That show's two days before their appearance at Canada's Amnesia Rockfest. This fall they also play The Fest.

Earlier this week we posted Crumbsuckers shows and H2O shows (opening for Rancid). What else?

All Out War - "Nothing Left To Bleed" (new song)