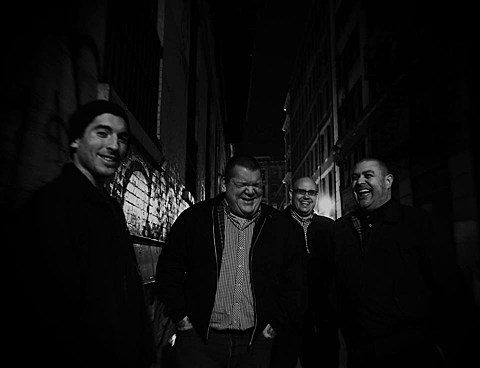 NYHC hardcore legends Sheer Terror will be playing a few shows this year, including a free show in their hometown at Brooklyn Night Bazaar on May 23. They'll be supported by Agitator and Cop Problem, the latter of which is also slated to play June's gigantic Punk Island. All dates are listed below.

While the word 'legend' is usually misused, applied to bands that don't actually have any legends propping up their mythos, it seems earned in Sheer Terror's case, if only due to singer Paul Bearer's patented, oft-recounted stage banter. Forming in 1984, Sheer Terror sought to amplify the aggression and heft of hardcore, upping the ante for a new breed pulling influences directly from the world of metal. Their breakthrough, 1989's Just Can't Hate Enough, discharged a thick, buzzing guitar tone that was more indebted to thrashers/proto-deathers like Martin Ain (Hellhammer/Celtic Frost) than those listed on the typical punk's template. No big deal? Well, the reason that sentence doesn't read oddly today is largely because of Sheer Terror and their likeminded scenemates' widespread influence.

Through numerous break-ups, Paul Bearer has kept the Sheer Terror torch lit, producing a total of seven LPs with a rotating cast of members. Their last, 2011's Spite, came after a 13 year long hiatus. (Not counting the few reunion dates in between.) But, the band's home is on the stage, allowing the confrontational and charismatic Bearer to let loose torrents of verbal abuse.

To get you prepared, check out two live sets from YouTube's large library of Sheer Terror documentation, with the list of dates, below...