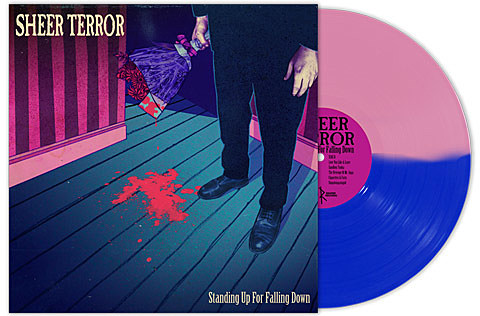 NYHC vets Sheer Terror are set to release their first full-length since 1995's Love Songs For The Unloved. Titled Standing Up For Falling Down (I see what you did there), the album promises a continuation of Sheer Terror's raging metallic hardcore, laugh-in-the-face-of-adversity humor, and, of course, more Paul Bearer. Standing Up For Falling Down is scheduled to hit the streets through Reaper Records on June 15 (preorder), the same label that released the band's "Spite" single in 2011.

At first glance, the long-player passes the eye test, complete with quotable song titles aplenty (too late to give a Poetry Society award for "Cigarettes and Farts"?) that skew towards Bearer's too-old-for-this-shit mindset. And the newly-shared song, "Ain't Alright," doesn't do anything to diminish expectations, finding Bearer in full roar. Say what you will, the man has a knack for somehow making world weariness come off as anthemic, not to mention his ability to absolutely lose it to drive a song home. This iteration of Sheer Terror -- Mike Delorenzo (guitar), Jason Carter (bass), and Anthony Corallo (drums) -- have been together since 2010 and sound quite cohesive. It may not be the unholy Hellhammering buzz of prior fight inciters, though it doesn't lack pep, speeding along with a stone-cold progression. Another cut, "Did You Just Meet Me?" was recently debuted on EVR's (pours one out) Black N' Blue Takeover (their last show is this Tuesday [5/20] at 8 PM, right before Invisible Oranges' last broadcast).

Standing Up For Falling Down's fully detailed announcement comes a week after Sheer Terror marked down dates for upcoming shows, including a free set at Brooklyn Night Bazaar on Friday, May 23.

Speaking of Black and Blue, the Superbowl of Hardcore goes down in Brooklyn this weekend, with Ludichrist (who are reissuing some albums), Discharge, Agnostic Front, Incendiary, 7 Seconds, Power Trip and more included.

"Ain't Alright" stream and Standing Up For Falling Down's tracklist appear below...

Standing Up For Falling Down Tracklisting:
1. Heartburn in G
2. Ain't Alright
3. Weird, Jealous, and Fat
4. Boots, Braces, and Alimony
5. Coffee, 5 Sugars
6. Did You Just Meet Me?
7. Love You Like A Leper
8. Sandbox Tonka
9. The Revenge Of Mr. Jiggs
10. Cigarettes and Farts
11. Singalongastupid