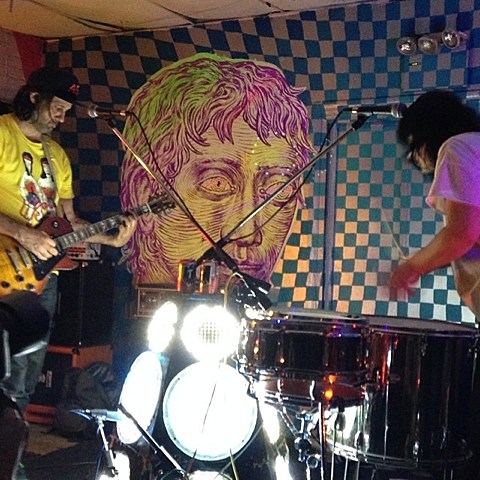 Florida's multi-venue punk fest The Fest has added even more bands to its 2014 lineup including 7 Seconds (who are touring), Shellshag, Single Mothers, RVIVR, Pet Symmetry, Only Crime and more. Full list of additions below. Previously announced names include Descendents, Lifetime, Paint It Black, The Marked Men, Modern Life Is War, Mineral, Hot Water Music, Melvins, United Nations, Screaming Females, Touche Amore, Into It Over It, Circle Takes the Square and many, many more. Passes are still available.

We just caught Shellshag in their hometown of NYC as the local representation on this past Friday's (6/6) Death by Audio stop of Martha (UK) and Delay's (Ohio) ongoing tour. Shellshag and their eccentric setup (if you haven't seen them, the duo face each other while Shag drums standing up and Shell plays guitar through a multi-color light-up speaker) were great as always. They debuted a new song and also covered Kelly Clarkson's "Since U Been Gone," which you can watch a clip of, below. Shellshag return to Death by Audio this Friday (6/13) with Benny the Jet Rodriguez, Shark Pact and Dogjaw.

Delay were another highlight of that show, with a punky set in the Thermals/Superchunk vein (high-energy stage show too). You can now stream their new album, Circle Change (out via Salinas), in its entirety below. Recommended.

List of Fest additions and Shellshag video also below...

Shellshag - "Since U Been Gone" at DbA (clip)

Plus: Tiltwheel and Rotting Out added to PreFest in Ybor