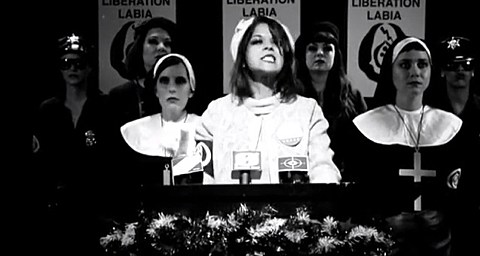 Shilpa Ray's last release was the It's All Self Fellatio EP, which came out in 2013 via Nick Cave's Bad Seed Ltd. label, and she's since announced that she'll follow it with an LP called Last Year's Savage in 2015 via Northern Spy. The album's first single is "Nocturnal Emissions," for which Shilpa Ray released a video back in 2012 before her last EP came out. The video was directed by Maria Gigante, and produced by, written by and starrng Shilpa, who plays an activist advocating for a masturbation-free world. The video came to be during the time of the Todd Akin controversy, and features a clip of his "the female body has ways to shut that whole thing down" quote. It gets NSFW for about a second. Watch it below.

Shilpa plays a hometown show in NYC TONIGHT (12/19) at Cake Shop with Wild Bore, Young Runner and Stuydeyed. That's $8 at the door. It's her only announced show at the moment.