Art for Shiner's The Egg 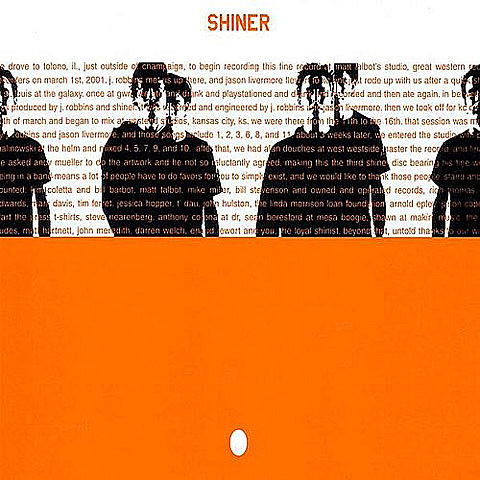 Shiner was a band from Kansas City, Missouri that was active from 1992 to 2003. The group formed in 1992, and quickly found wide exposure, releasing a vinyl EP in 1993 and touring with acts such as Sunny Day Real Estate, Chore, Jawbox, Season to Risk, The Jesus Lizard, and Girls Against Boys. The group released their first LP, Splay (recorded at Steve Albini's Chicago studio) in 1996, and a second album, Lula Divinia the next year. Sub Pop took notice, and released a 7" single of the group's songs "Sleep it Off" and "Half Empty". Following this the band toured with Hum in 1998.[1] A third full-length, Starless, was released on a label run by members of The Descendents, Owned and Operated, in 2000. A fourth LP, The Egg, would follow before the group broke up in 2002.

Shiner called it quits with a show in their native Kansas City in January of 2003, with its members taking to projects like Every Time I Die, The Damned Things, The Life & Times, With Knives, and many others.

Close to ten years later, the band is back for a quintet of reunion shows in the US in celebrate of The Egg's reissue, due on August 7th. The dates include stops in Lawrence, Kansas, Chicago, LA and NYC at Irving Plaza on August 11th with Errortype:11. Tickets are on sale.

In related news, Errortype:11 shares members of Primitive Weapons, who will team with Whores, Family, and Tiger Flowers at Saint Vitus on June 13th. Tickets are on sale. As previously mentioned, Whores will also play Union Pool on June 15th with Harkonen, The Atlas Moth, and Fight Amp as part of a Brutal Panda/BV-BBG Northside event. Tickets are still available, or get in with your Northside badge.

A listing of all Shiner tour dates and a teaser video for The Egg reissue are below.

Shiner - The Top of the World