Rick Smith of Torche at MHOW (more by Justina Villanueva) 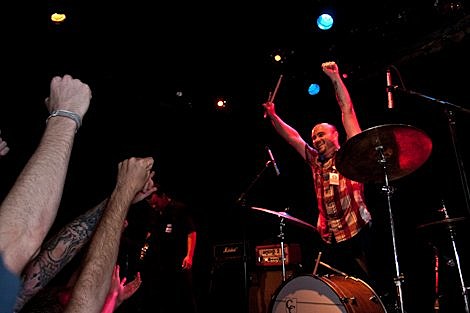 Torche closed out the room with an assist from a fill-in drummer in the absence of Rick Smith (who broke his hand while touring with his side project Shitstorm). Although Smith's theatrics were missed (you rarely ever see anyone standing and jumping down TOWARD the kit, save for Rob Shaffer of Dark Castle and a few others), the band played a well-executed set of bubblegum pop which contained one song from their upcoming split with Boris, and a ton of thundering but sugary classics. [BV at SXSW 2010]

When Torche played the BV show at SXSW (and again at Beerland) sans drummer Rick Smith, it was all because of his pummeling work in Shitstorm, a grind side project. Now said grind venture that once shared a split with Magrudergrind (who are playing NYC on August 7th) and who now also feature Jonathan from Torche and Eric of Capsule/ex-Kylesa fame, will hit the road for a string of east coast dates.

Look for the band to brutalize NYC at The Acheron on September 1st alongside the fantastical Pollution (also see them at Acheron with Megasus and The Love Below!), Syphilitic Lust (playing another show with Coffinworm and Unearthly Trance), Curandera (who just played with The Body), and Divorce Money.

Meanwhile, Rick Smith will be in NYC next week with Torche at Music Hall of Williamsburg on August 6th. Tickets are still available for the show which also includes Boris and Russian Circles.

Full Shitstorm dates, and some video is below...

Shitstorm - 5. Destroy Them All