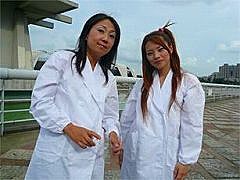 Shonen Knife will be "Back in the U.S.A." in November! Good news for fans, surely - as the #1 Question we get here is "when are they coming back again??!!" The tour will start on the East Coast on November 19... moving to the West Coast & ending in December. Looks like a great tour, Fans! The bassist for the tour will be original Shonen Knife founding member, Atsuko Yamano(!), who is now residing in the U.S. and will be up front again with the band on this tour. This will be the Mega-live Shonen Knife Experience! No information on a U.S. Release of "Fun! Fun! Fun!", as yet - but many of the songs on the initial Japanese release (see the following) are in english, so it is recommended that U.S. Fans secure a copy of the Japanese release!! (You can get the Japanese release at the shows on the tour.

""We are not old-style or new-style. We are always Shonen Knife-style," says founding member Naoko Yamano, set to embark Osaka, Japan for the band’s second tour of the U.S. in support of ‘Genki Shock’ (Glue Factory). The Shonen’s current line-up will include founding sisters Naoko and Atsuko Yamano (the latter of whom switched from drums to bass following the departure of Michie Nakatani), and drummer Etsuko Nakanishi."