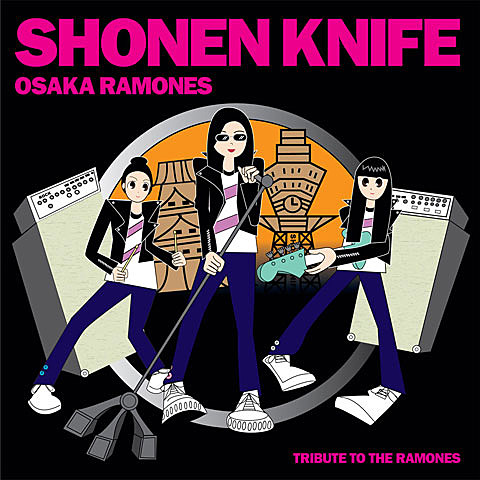 Japanese pop punkers Shonen Knife are celebrating their 30th Anniversary this year with Osaka Ramones: A Tribute to the Ramones. The album features covers of 13 Ramones classics including "Pinhead," "Beat on the Brat," "Psychotherapy," and others, and will be released on July 19 in the US via Good Charamel Records. Pre-order the album and listen to 30-second clips of each song on Good Charamel's website. According to Shonen Knife's Naoko Yamano:

Ramones were my all-time idols since I first heard their music from a radio and rushed to a record shop. This year is the 30th anniversary of Shonen Knife. For celebration, we decided to record a cover album of our favorite band the Ramones. The title is "Osaka Ramones" with our respect. I'm very happy to release an Osaka Ramones project and to recognize their contribution to the evolution of Shonen Knife.

In honor of the album and the band's 30th Anniversary, they will go on a North American tour this fall with support on some of the dates from Shannon & the Clams. The tour hits NYC twice. They play on October 22 at Public Assembly during CMJ towards the beginning of the tour. The band will then cross the country and return to Brooklyn on November 18 at The Bell House. Shannon & the Clams aren't on either of the NYC bills, and at the moment, neither is anyone else. Tickets are on sale now for the Bell House show. No ticket info for Public Assembly has been announced yet.

All tour dates, album preview, tracklist and a live video of "Ramones Forever" into "I Wanna Be Sedated" below...

Shonen Knife - "Ramones Forever" and "I Wanna Be Sedated" Live

Tracklist:
01 Blitzkrieg bop
02 Rock and roll high school
03 We want the airwaves
04 She's the one
05 Rockaway beach
06 Sheenah is a punk rocker
07 Scattergun
08 Psychotherapy
09 The kkk took my baby away
10 We're a happy family
11 Chinese rock
12 Beat on the brat
13 Pinhead