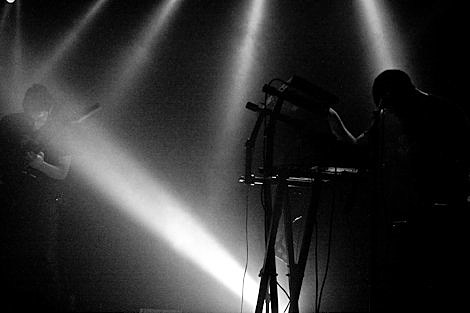 Occupying the vast nothing at the crossroads of black metal, noise, ambient, and drone are Chicago duo Locrian. The band released Drenched Lands last year and are already prepping Territories via Small Doses in the US. The new effort features luminaries from the Chi scene performing their "most fully realized form of Locrian's dystopic vision"; look for Blake Judd (Nachtmystium), Mark Solotroff (Bloodyminded, Anatomy of Habit) Bruce Lamont (Yakuza), and Andrew Scherer (Velnias) to appear on the LP. Until that record hits your friendly neighborhood distro later this month, check out the first taste of the LP above, "Procession of Ancestral Brutalism". The band was recently interviewed by Black Rat Method.

By now, you have most likely heard of High On Fire's upcoming Snakes Of The Divine due on E1 Records. The album is currently in the pre-order stages (with vinyl options), and from what I have heard so far, its another massive effort from this Oaktown posse. More to come, and look for them to hit the road supporting the record soon.

Blackened death is Vasaeleth's specialty, and the band fires away on their debut LP Crypt Born & Tethered to Ruin. Featuring Antinom of the mighty Dagon behind the kit, the record is out NOW via Profound Lore and is highly recommended for fans of Blasphemy, early Bolt Thrower, Teitanblood and anything generally putrid and foul. Check out the first track to emerge, "Wrathful Deities", and make sure and pick up the LP!

Abscess, featuring Chris Reifert of Autopsy/Death, will release their new LP Dawn of Inhumanity on March 9th via Peaceville. Recorded in October 2009, the effort features vocals from Darkthrone who will release the LP as their final on the Tyrant Syndicate imprint for Peaceville. Download the title track above. Reifert's other band, Autopsy, will headline MDF 2010. 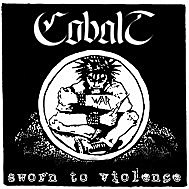 Cobalt will release a new live LP entitled Sworn To Violence via Phil McSorely's new imprint Hooded In Oil Records. The LP was pulled from a 2003 set and includes a cover of Filth's "Scarred For Life" which is downloadable above.

As previously discussed, Buzzov-en's new EP Violence From The Vault is out NOW via Relapse. The EP comes from the lineup that appeared on Sore, and we have one of my favorite tracks (if not my favorite) from the EP for download above. Dig on "Mainline". No word on that previously discussed Buzzov-en documentary in the works. Former Buzzov-en member Dixie Dave will be back in NYC with his new band Weedeater. Speaking of Weedeater, the band has titled their new LP, Jason... The Dragon. (Get it? Burnout!) The band will hit the studio in April to record the effort.

Is Indianapolis officially a part of the state of Maryland? Profound Lore introduces us to yet another killer doom band from the home of The Gates of Slumber and Coffinworm, Apostle of Solitude. In addition to wall-of-sound old school doom riffage, AoS features fantastic vocals from guitarist Chuck Brown, former drummer for The Gates of Slumber and The Keep (which also featured Simon and McCash of TGoS). The band recently completed their new LP Last Sunrise, due on Profound Lore in middle March, and the record is a must hear for fans of old school doom like TGoS, Iron Man, or any thing that worships at the altar of Iommi/Butler/Ward. Download "December Drives Me To Tears" and "Hunter Sick Rapture" above.

Southern Lord will release a vinyl subscription series featuring exclusive versions ofBlack Cobra's Chronomega, Ascend's Ample Fire Within, Pelican's What We Call Come To Need, Yob's The Great Cessation (one of my faves of last year), Twilight's Monument To Time End (!, more on that in a sec), and a new exclusive one-sided 12" from Trap Them called Filth Rations featuring four unreleased tracks and a second side etched by the great Justin Bartlett. More details on the set is here which contains a mysterious final slab of vinyl. Which brings me to my next point.....

One thing that Southern Lord forgets to mention, that Stephen O'Malley DOESN'T, is that Southern Lord will release a new Burning Witch box set! The vinyl boxset will be packaged with a DVD that will contain a full live set, including the below clip of the band performing "Still Born". Could this be the final piece to the Southern Lord vinyl subscription?

While that Southern Lord subscription is, in and of itself, rather large news, it seems that everyone is glossing over the most important piece of that.... the emergence of details regarding Twilight's new LP, Monument To Time End. For the unfamiliar, the USBM "supergroup" currently contains some of my favorite performers in the metal underground: Aaron Turner (Isis), Stavros Giannapoulis (The Atlas Moth), Blake Judd (Nachtmystium), Jef Whitehead (Wrest, aka Leviathan), and Sanford Parker (Minsk). The awesome lineup intersects heavily with Nachtmystium's lineup, as Blake has asked Parker and Whitehead to hop on board with guitarist Jeff Wilson and Will Lindsay (Wolves In The Throne Room, Middian). Nachtmystium is currently recording Addicts for a July release on Century Media. 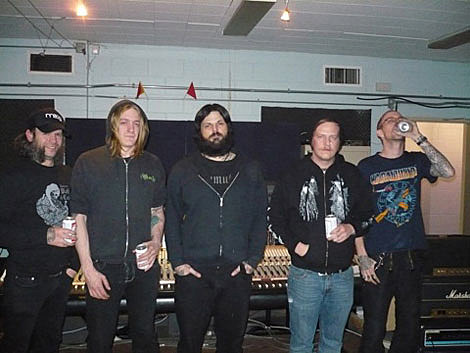 For those of you interested, Burzum's new LP Belus is waiting in the wings, perched for a March 8 release. You can check out that release via a stream that recently appeared on Amazon.

Relapse has announced their 2010 SXSW showcase for Mar 17th at Red 7, and it's a whopper: Voivod, Brian Posehn, Tombs, Howl, Graves of Valor, Mammoth Grinder, and Kill The Client.

Earthride has begun work on their new LP! Details are still to to come, but look for it on Southern Lord. Earthride features Dave Sherman of ex-Planet Caravan fame.

Darkthone's Circle The Wagons cover art. The album is due in April. 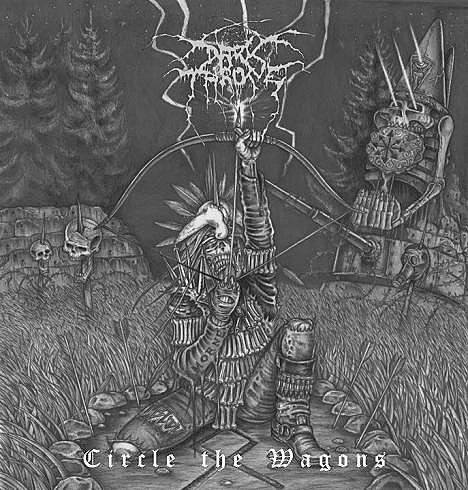 Justin Broadrick is reworking Godflesh's monumental Streetcleaner to include demos and alternate takes. The LP is planned for release in June via Earache Records to coincide with their appearance at Hellfest.

Profane Existence have posted an interview with current faves, Swedish crusties Agrimonia. Incorporating elements of black metal, crust, and post-metal, the band released their much lauded demo on LP last year (pick it up), and are prepping new recordings for a release in 2010. Details are to come. In the meantime, dig on "The Decay" available for download above.

Tom Warrior and the great HR Giger collaborate again! 25 years after HR Giger's art graced the cover of the Celtic Frost classic To Mega Therion, look for the below cover to appear on Triptykon's new LP Eparistera Daimones, due on Century Media on March 23rd. Stream two new songs from that record and both destroy. 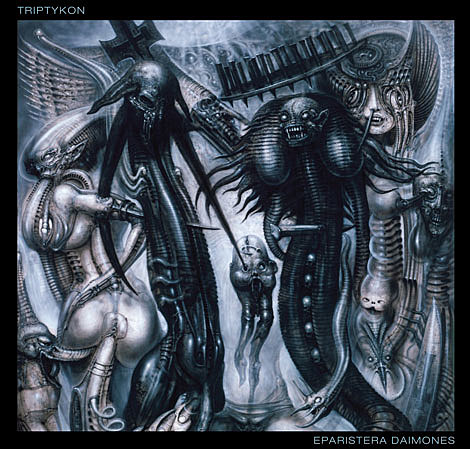 Fuck The Facts have posted a new song, "Loss Upon Loss", from their upcoming "Unnamed EP" to their myspace page.

If you don't have a full-time job, it's probably easy to keep up with Gnaw Their Tongues and side project Aderlating. GNT have a new, and VERY limited split with Painforged, pick that up via Aquarius. And Aderlating has a new EP, Dying Of The Light, available for FREE download as well as a new split with Nekrasov available for purchase via Chrome Leaf.

Hooded Menace are also prepping their new LP Never Cross The Dead for a March/April release. The surprisingly melodic (and awesome) lead track from that LP, "As The Creatures Ascend", is available for download above. The record is one of three upcoming releases for the band, as the Finns are also preparing to release splits with Anima Morte and the mighty Asphyx! Both splits will see the light on Doomentia Records. Speaking of Asphyx, the band recent added bassist Alwin Zuur.

Amenra are currently working on their new album, tentatively titled Mass V, as well as a live DVD due this summer. Amenra side-project Kingdom will release their second LP via Hypertension as well. Look for the Billy Anderson produced Hemeltraan to surface with art from Stephen Kasner.

According to our dudes at The Obelisk, Ufomammut are working on their new LP, Eve, due in April 2010 via Supernatural Cat. The Italians call the new single-track 40-minute piece more "intense and evil" than their previous record, Idolum. More details are to come, but until then, dig on a teaser trailer for the new LP below.

Another favorite Italian trio though with a sax instead of a guitar, Zu are reissuing The Way Of The Animal Powers On 180-Gram Wax. The re-ish features a remastering job by James Plotkin and comes in a gatefold sleeve. Noice! Check out one of the tracks from that record, "Tom Araya Is Our Elvis", above.

One record that I ended up spinning a bunch towards the end of 2009 and into 2010 is Hellshock's third album, They Wait For You Still, out NOW. This Portland band has always existed more in the punk scene, but for fans of early DM, this crusty death metal is absolutely undeniable. Out now via HG:Fact on CD and Blackwater Records on LP. Highly recommended.

Romanians Negura Bunget have announced their new album, their followup to the massively influential Om. The record is called Maiestrit and is due via code666 Records on March 26th in a special edition wooden box. The album marks the final release from the principal Negura Bunget lineup, as the members have split into two with Dordeduh becoming the new home for Hupogrammos and Sol Faur.

Glorior Belli - The Full Intrepid Experience Of Light teaser, due 2010 via Candlelight Records

Grindcore goes global with Singapore's Womrot, who will re-release their killer LP Abuse on Earache Records. The record was "honorably mentioned" as one of my favorite albums of 2009. It rules.

Earache will release the new At The Gates DVD, The Flames Of The End, on Feb 22nd. The three disc set will feature a documentary on the band, a full 75 minute show from Wacken 2008, and a collection of various live clips from throughpout their storied history.

Engineer have recorded their new LP, "nine songs clocking in at roughly thirty-five minutes". No word on a release date thus far.

Zeni Geva have announced the release of their new LP Alive and Rising via their website. The live LP was culled from a dates in Kobe and Tokypo last year and feature the return of Tatsuya Yoshida after a 20 year abscence. Zeni Geva's last LP, also a live album, was released in 2001. Pick up both releases, as well as KK Null solo material, via the band directly.

Malkuth have added a show at The Production Lounge with Demilitia and Desolate on 2/5. Show starts at 830 and $5 gets you in. The band recently played (and destroyed) WFMU in Jersey City. Download that set.

Burning World will release the previously discussed Wolves In The Throne Room Live at Roadburn on CD/DVD after releasing said set on vinyl/DVD last year. Order the set via the band directly, and dig on the art and the tracklisting below.

NEWS BLAST (BEATS):
- Hells Headbangers should have copies of the Deathspell Omega five vinyl boxset in the coming weeks.
- Download Blind To Faith's The Seven Fat Years are Overfor free.
- Check out an interview with Megasus done by The Obelisk.
- Although Wino is no longer on board with Place of Skulls, I still am interested in hearing their new LP, which is being recorded.
- Check out pics of the Deadbird/Burned Up Bled Dry split.
- Portal was recently interviewed by Crustcake.
- Midwest Fuckfest have announced details for the festival on May 21-23 in Milkwaukee, WI. Full lineup is below.
- Maruta is undergoing some lineup changes and have completed some demos for the new LP.
- Crustcake did an interview with Radiation Black Body, aka the rhythm 2/3rds of Defeatist.

WOLVES IN THE THRONE ROOM - LIVE AT ROADBURN 2008 TRACK LISTING
1. Vastness & Sorrow
2. Face In A Night Time Mirror Pt.1
3. Cleansing
4. I Will Lay Down My Bones Among The Rocks And Roots