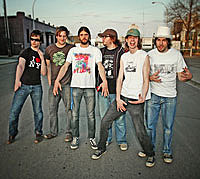 Not only is Shout Out Out Out Out playing a free show in Brooklyn with CSS on August 3rd, they're playing a free one a day earlier at Hiro Ballroom as well (RSVP). Also on the Hiro Ballroom bill: "a live performance by the fabulous Cuzinier and Orgasmic from famed Parisian hip-hop outfit TTC". I guess that means that the guys from TTC Will be doing more than DJing, but less than being the whole group. I'm not sure exactly what that will be like, but both shows (the one with CSS and the one with TTC) should be great (minus the Hiro Ballroom factor). TTC's only other scheduled tour date is at the Oya Festival in Norway on August 9th. More SOOOO tour dates below...