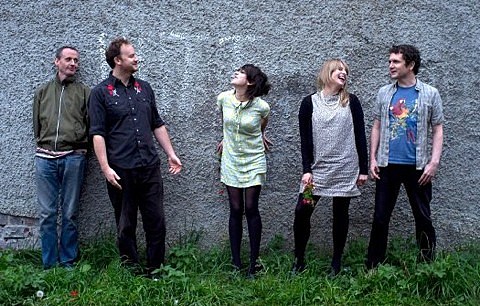 One of my favorite records of 2012 was UK group Shrag's third album, Canines, which came out over the summer and didn't get much attention in North America. And that's partially due to A) the album only got a digital release over here and B) they didn't tour like they did for 2010's Life! Death! Prizes! (they even played one of our CMJ week parties). But Canines is easily the band's best record to date, retaining the band's scratchy snarl but letting a few rays of sunshine (and mid-fi production) to lighten the proceedings and up their pop side just a bit. You still get those big Fall-like basslines and shouty choruses, just just cleaned up a little. There's no dulling the lyrics, though, that still aim for the jugular. This is an album with big hooks and a bigger bite. Show us your canines indeed.

You can stream the entirety of Canines below and check out videos for "Devestating Bones" and the album's title track as well. Keep your fingers crossed that Shrag might hit North America for SXSW or NYC/SF Popfests in 2013.

Shrag - "Show Us Your Canines"

Shrag - "Tendons in the Night"