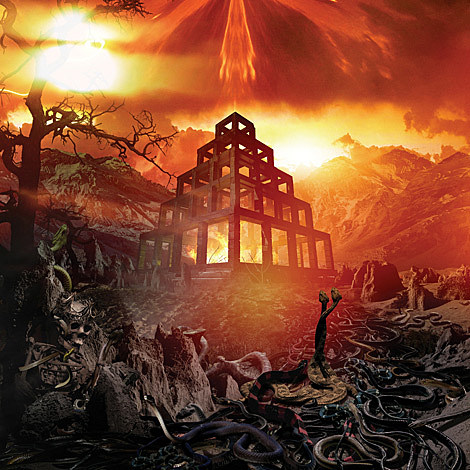 It kinda goes without saying that anticipation is on high for the forthcoming self-titled Shrinebuilder LP (due on Neurot in late Oct/early Nov). Add in the fact this mega-terrific supergroup, made up of Al Cisneros of Om, Scott Kelly of Neurosis, Wino of St Vitus/The Obsessed, and Dale Crover of Melvins, have hinted at multiple live dates. Chicago was the first, and now we can reveal details on the first east coast date!

BrooklynVegan is proud to announce that we will team up with the shadowy folks behind The Blackened Music Series (who brought you Repulsion / Brutal Truth / Pig Destroyer) to present the NYC debut of the mighty Shrinebuilder on Nov 15th at Le Poisson Rouge! Tickets are on sale. Details regarding supporting acts are to come, but you can bet that it's gonna be huge.

Wino is hitting the road with Clutch, including a pair of dates at Irving Plaza (10/9 tix, 10/10 tix). Oh, did I mention that he and f'n Saint Vitus are playing Europa?!?!? Tickets for St Vitus are here.

Melvins are playing with Weedeater and Evil Army, supporting Down at Nokia on 9/11. Tickets are still available.