Al Cisneros of Shrinebuilder at LPR (more by Greg Cristman) 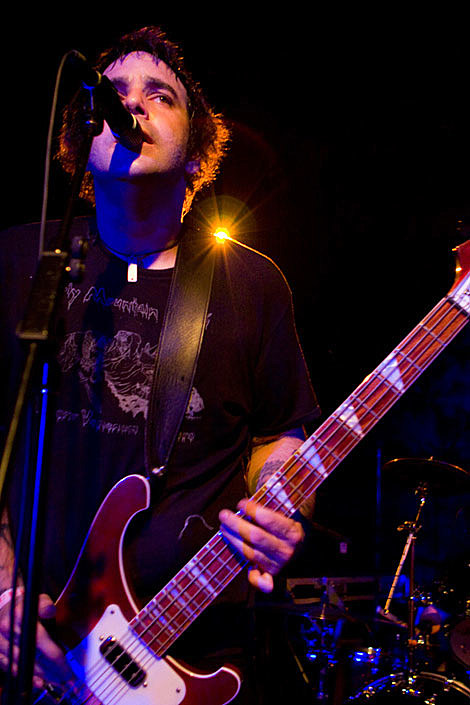 As I write this, Scion Rock Fest is still 46 days away and still in Ohio, but, it has been announced, that one of its very special headliners will play NYC two days earlier! Shrinebuilder will play a show on Thursday, March 11th at E&L Auditorium at NYU. Ticket info is forthcoming.

The NYU date is currently the lone east coast show scheduled for the band. Earlier in March they'll be skipping along the west coast with A Storm of Light, tagging shows with Harvestman (aka Steve Von Till of Neurosis). Full tour dates are below.

Speaking of A Storm of Light, do you think you have the chops to be their new drummer?

In just over two years since the band's inception, A Storm of Light has had the honor and privilege of playing with many great drummers: Vinny Signorelli, Jason Roeder, Pete Angevine, Andy Rice, and our current man, Geoff Summers. While this band is built around revolving members both in touring and recording, we have decided that a central three-piece will make us sonically/rhythmically stronger. That said, we have decided to look for a permanent drummer, one that will make Storm their primary focus, and be part of the band for the long haul.... Ideally we want someone in Brooklyn/NYC, or damn close. While we are willing to consider people outside of the area (New Jersey/Philadelphia/Upstate NY/ etc), we are constantly writing, recording, practicing, touring, so you will have to be in Brooklyn very regularly.... Please include links to your drumming/musical projects, and email us.

Though the search may be ongoing, that doesn't stop the the band from hitting the road on 2/18 with their current drummer, Geoff Summers of Batillus. The band loops back to NYC on 3/18 to play a homecoming show at Union Pool.

Ex-Storm drummer Vinny Signorelli will pound NYC on 2/12 at Union Pool with his current band, Unsane, when they join Made Out of Babies, United Nations and Dark Vibe. Tickets are on sale. The show is a BV/Osiris production.

Al Cisneros of Shrinebuilder will be back in New York (state) with the legendary Sleep when the band hits ATP New York at Kutscher's in September. Tickets are still available.

All tour dates and a few live Shrinebuilder vids (some in HD) are below...